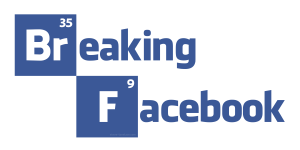 I have a long-term Facebook addiction. I signed up for the service back in the early days, when you needed a .edu email address to register. I’ve logged in just about every day since. Facebook came out right after I graduated college, and it was a good way to keep in touch with my friends when I lived in Samoa. When I moved to Dallas, I used it to make plans with my new friends, and indeed, this is the only reason I haven’t quit entirely. Still, I’m working on it. Let’s take a look at all of the pros and cons of the Facebook world.

Before we look at the reasons to quit, let’s list the things that keep my Facebook addiction going. The thing is, a lot of good has come from my relationship with the service. For example, I found my apartment on Facebook. I mentioned I was looking for a new place and one of my friends came through. But mostly, it’s a way to stay connected with my friends. I met my main group of friends through Meetup.com. Though we still use that site to “recruit” new friends, my clique uses Facebook events to plan gatherings amongst ourselves. We also have a private Facebook group where people can post last-minute activities, (“Hey, I’m going to get some bubble tea this evening if you want to join”) or ideas for future events, (“We should see the new Star Wars movie soon.”)

Note that none of these activities need Facebook specifically. We could, for example, use eVite to plan big parties and Slack to chat with each other. But Facebook has something that other services don’t. Everybody and their brother is on it. And it’s all integrated into one gargantuan site. If you want to contact everyone quickly, Facebook is the best way to do it. When Google Plus came out, I kind of hoped we’d all migrate there, but as long as everyone I know is using Facebook, it’s tough to leave entirely.

I’ve been a compulsive email checker since the 1990s. When Facebook appeared, it gave me another thing to check. Every time I was near a computer, I had to log on, check my email and check my Facebook. Still my Facebook addiction was limited to those times when I was near a computer. Then I got an iPhone. After that, I started checking Facebook every spare moment: waiting in line at the store, riding the elevator at work, stopping at red lights. Facebook became the first thing I’d check in the morning and the last thing I’d check before bed.

I checked it so much that I could tell the patterns. In the wee hours of the morning, it would show more of what people “liked” and less direct status posts. If I checked in five minutes after checking in, there would be no notifications at first. Then a moment later, an unimportant notification would pop up, telling me that my professional Facebook page had three new views, or that one of my friends was considering going to an event in a nearby town. Facebook was going out of its way to find stuff to keep me entertained. A noble effort in one way, and kind of creepy in another way. But that’s not the straw that broke the camel’s back. The real change (for me at least) came with the 2016 election.

A lot has been said about Facebook’s role in the 2016 election. As the service has grown more ubiquitous, it’s become a major media outlet, one than can be manipulated for various reasons. There’s been a lot written about Facebook’s fake news problem, and I won’t rehash it all here. Instead I want to talk about how it affected my Facebook addiction. I unfriended one person before the election and muted a bunch of others, leaving myself in an echo chamber. After the surprising results of the election, many of my Facebook friends started acting like the Apocalypse had just happened. Around the same time, I was dealing with depression and anxiety for unrelated reasons. So I decided to take a break. Nothing drastic. No announcements that I was taking a break (I didn’t want the attention.) Just a week without logging in. One measly week.

My week-long Facebook break was rough. I deleted the Facebook app from my phone, along with Twitter, Instagram and Snapchat. (I didn’t want to replace one bad habit with another.) The only thing I kept was Facebook Messenger. If someone needed to get a hold of me, they could. And I still had text messages, email and good old fashioned telephone calls. Still, it was tough. I lost count of how many times I would open a new browser tab and type “f”. At least 20 times a day. Likewise, I would open my phone and swipe around on the main screen before I remembered that I deleted my social media apps. It’s hard to count how many times I checked my Facebook a day (since the act of counting changed my behavior), but I roughly estimate that I was logging on 100 times a day at least.

Every time I tried to log on without thinking, I realized that my Facebook addiction was pretty severe. It soaked up at least an hour or two a day, in little intervals. And when my fingers weren’t passively trying to log on, I would think of all kinds of Facebook statuses. I once wrote a semi-humorous blog post about a “Twitter muse.” There is definitely a part of my brain that’s constantly thinking of little quips to share on social media, and the temptation to share was strong. Strong enough that it made me step back and take a look at my habits. I resolved to stop living my life as a performance for others, and start focusing on the moment at hand.

I’m still not over my Facebook addiction, but I’m a lot better than I used to be. Will I ever quit entirely? Not for now. I still use it to keep in touch with my friends. But now I feel like I control my social media. It no longer controls me.

What’s your experience with Facebook? Let me know in the comments.