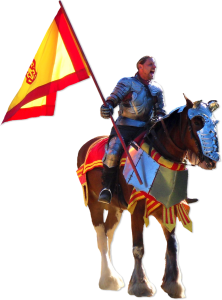 A little jousting would spice things up.

My little sister recently graduated from college. As I sat through the ceremony in a campus gymnasium, a few different thoughts crossed my mind.

It’s funny how the same song is used for solemn American graduation ceremonies and rowdy English football games. Only context and tradition differentiates the song of PhD candidates and soccer hooligans.

Some people seem to think it’s a competition to see who can cheer loudest for their graduate. It’s as if the kid’s going to get an extra A if their family can create more decibels than anyone else’s. The worst of these Noise Olympians are the folks who bring air horns. They didn’t have any at my sister’s college graduation, but there were a whole lot of them when both she and I graduated high school. I even heard a couple during my own college graduation. It’s as if these people hear “Pomp and Circumstance” and turn into English soccer hooligans.

The thing I like most about graduation ceremonies is the ludicrous ceremonial clothing. Not so much the caps and gowns that the graduates wear. These look pretty cheap, even if they cost each grad $40–$50. No, what I like is the full academic regalia of the professors on stage. It looks like a damn Renaissance Fair up there. Except that the faculty members are still wearing modern dress clothes. (And by modern, I mean 20th Century or later. Let’s face it; academics are not known for keeping up with fashion.) In any case, I think they should take it one step further and go full Medieval. Maybe even through some Steampunk elements in there. If we’re going to play dress-up, let’s do it right.

Though there are some interesting things going on during a graduation ceremony, my favorite part comes after: going out for a meal with friends and family. I still remember exactly what and where I ate after each of my graduations, as well as each of my sister’s. Because the point of it all is to bond with loved ones over all the other assholes there with air horns. That to me is the meaning of a graduation.