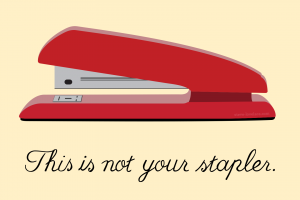 This is a more modern adaptation of my 10th grade drawing, with an allusion to one of my favorite movies, “Office Space”. (Purchase)

One of my favorite paintings is “The Treachery of Images” (“La Trahison des Images“) by René Magritte. Even if you don’t know the title or the artist, you may have seen it. It’s an old fashioned tobacco pipe with the caption (in French), “This is not a pipe.” It’s a form of surrealist art, and while it seems absurd on the surface, it’s not as silly as you might think. That’s why I like it so much. It’s not just pretty to look at; it has a deeper message about the nature of reality.

I don’t remember when or where I first encountered Magritte’s painting, but I knew about it by the tenth grade. One of the first projects we had to do in my high school art class was make and decorate our portfolios. I grabbed a stapler off the teacher’s desk and drew it in colored pencil. Then I wrote underneath, “This is not a stapler.” I remember a classmate saying, “Nuh-uh. Looks like a stapler to me.” To which I replied, “Nope. It’s not a stapler. It’s a picture of a stapler.” It was the sort of smart-ass pedantry that really appealed to a 15-year-old like me.

But beyond the pedantry, I really liked the message of the painting: images are not reality. Like most people alive today, I grew up in the age of television. I don’t think it’s a coincidence that surrealist art appeared in the 20th century. René Magritte was born in 1898, right around the time that movies were becoming a thing. Salvador Dalí, arguably the most famous surrealist, was born just a few years later, in 1905. Dalí was interested in dreams, as reflected in his most famous painting, “The Peristance of Memory” (aka, the melting clocks). He was also an early film pioneer, who collaborated with Luis Buñuel on the short film “Un Chien Andalou”. We watched that in a college film class, at it’s like watching a nightmare. That’s the point. The movie uses “dream logic”. Even from the earliest days of cinema, Dalí was pointing out that movies, like dreams, are not reality.

[Fun fact: Dalí also designed the Chupa Chups logo. That’s not surrealist art, but it is a nice bit of graphic design.]

René Magritte was also influenced by Polish scholar Alfred Korzybski. Korzybski was most famous for saying, “A map is not the territory it represents.” Like paints, movies, and dreams, maps cannot be a perfect representation of reality. As someone who makes maps for artistic, rather than navigational purposes, I quickly realized this was true. Besides the difficulties of projecting a 3-D globe onto 2-D map, there is also the question of what to represent versus what to leave out. My favorite map of all time, the London Underground’s “Tube Map”, is a simplified diagram that bears little resemblance to the real world geography of London. And in fact, I think you could argue that the Tube Map is once of the greatest pieces of surrealist art ever made — one that reflects the liminal spaces of the rail network.

In everyday language, we use the word “surreal” to mean “not real”, but a quick look at Latin roots proves this wrong. The prefix “sur-“ is a shortening of “super-“, meaning “over” or “greater than”. Surreality is not fantasy, despite the fantastic elements of Dalí’s paintings. Rather, it’s “super-realism”, or “reality plus”. That “plus” is the human mind. A pipe is a physical object that you can hold; a painting is a different object that uses colors and shapes to invoke the idea of a pipe. By this definition, any art could be called surrealist. But what really sets surrealist art apart is how it cheekily points out that the map is not the territory. Surrealist art is more self-aware than the traditional art that came before it.

Are you a fan of surrealism? Let me know your thoughts in the comment section.