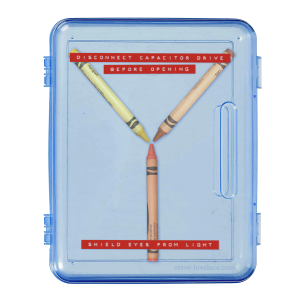 One of the hardest things about growing up is striking the right balance between conformity and nonconformity. Every person who’s ever lived has an innate desire to fit in. We are, after all, social creatures. And yet, everyone wants to stand out a bit too. We are all individuals with our own hopes and desires. Finding a balance between the two is the underlying cause of many of life’s problems. The balancing act is different for everyone. Nothing illustrates that better for me than the Crayon Box Time Machine.

When I was in the second grade, I built a time machine out of my crayon box. Once I finished my creation I blurted out to the class, “Hey everybody! I built a time machine!” I remember my classmates’ reactions. One kid blurted out, “Dream on!” and then several other kids, seemingly the whole class, followed suit. Our teacher, whose name I don’t recall, shushed the other kids. Then she said, “Yes, Steve, do dream on. We need people who dare to dream.” I’ve thought about this moment many times over the years, and I’ve bragged many times about being the kid who wasn’t afraid to dream.

Put on a Pedestal

I relayed this tale to my therapist recently. I had always admired my teacher’s response to my classmates’ cynicism, but my shrink begged to differ. She pointed out that, by telling the class that I wasn’t afraid to dream, she was putting me on a pedestal. I’m not sure what a better response would have been, but in hindsight, I didn’t need to be told I was different. In reality, I was just being a seven-year old child playing pretend. I didn’t announce my Crayon Box Time Machine to the class because I wanted to make some big philosophical statement about thinking outside of the box. I was just being a little kid, using my imagination.

The Nail That Sticks Out

An old Japanese proverb says that “the nail that sticks out gets hammered down.” I sure felt hammered down when my classmates spoke up that day. Throughout my life, I’ve always felt like I was put on a pedestal. And like the proverbial nail, I was always waiting to be hammered down. Sometimes this was very overt, like when the playground supervisors at my school exempted me from group punishments, making me feel like a pariah for being a “well-behaved” kid. Other times were more subtle, like the parties I didn’t get invited to, which led me to wonder whether or not it was a deliberate decision on a mere oversight. I think everyone deals with these types of moments, no matter how tall their pedestal may be.

I’ve learned a lot from my Crayon Box Time Machine. Whether you’re a child or an adult, you have to find that balance between sticking out and fitting in. In the workplace, you need to do work that your manager can appreciate, but you don’t want to come off as a sycophant. In the dating world, you need to let your personality shine, but without appearing too weird. Whatever the situation, you can be too quirky or too boring. I’m pleased with the balance I’ve struck, though it’s a constant struggle. Still, I’m grateful for building that time machine.

Have you ever had a situation where you stuck out in a bad way? Or maybe in a good way? Let me know about your own Crayon Box Time Machine in the comment section.