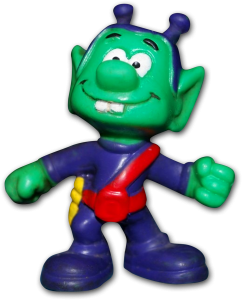 We worked flea markets for a while. The whole family was involved. My mom made costume jewelry on a workbench in the basement. She took apart old watches and used the clockwork for broaches and pendants. Then every Saturday, we would set up a booth in at the flea market in Belleville, Illinois.

I was ten and my sister was five. We helped my parents set up and tear down. Once there was a nice lull at our table, I would wander the flea market with my sister. It was a big place, and covering the whole flea market took a good hour. Most of the booths weren’t that interesting. I wasn’t interested in guns or knives or furniture or tchotchkes. Still, there were two booths that always drew my interest (and my allowance). The first was a coin dealer, who sold a lot of coins in my price range: wheat pennies, buffalo nickels and mercury dimes. He also sold novelty coins that were either four inches or four millimeters in diameter. Like many kids, I was fascinated by things that were not their proper size, so I always liked to buy these novelty coins.

The Astrosniks was a whole series of plastic figures resembling little green Martians. Most of them were engaged on some kind of sport: skiing, boating, skating, etc. There was an evil one with a beard and cape, a confused one with a drill, a robot, and a token female with blonde hair and an ice cream cone. (Like the Smurfs, they only had a single girl.) One day, I even got the toy spaceship for them to play in. Along with my dinosaur figurines, these were some of my favorite toys to play with as a kid. Only Legos were better.

Despite all of the toys I got, for the most part the flea market was a boring experience. I recognize it now for what it was: work. In that regard, working the flea market with my parents helped me with the drudgery of grown-up work. To my parents’ credit though, they never said anything about it “building character”. It was just what we had to do to put food on the table. And as jobs go, there are a whole lot worse. Looking back, I have fond memories of our time at the flea market.