I Killed the McDLT: My 4th Grade Petition 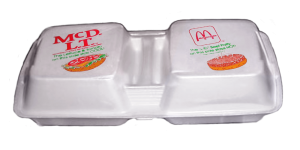 As a kid back in the 1980s, I loved McDonald’s, like most of my peers. This was back when McDonald’s was a treat, and not just a lazy way out of making dinner. And while I never knew just how unhealthy the food was, I did realize there was a problem with the boxes the food came in.

Back then, McDonald’s packed most of its sandwiches in styrofoam clamshells. The worst offender in this regard was the McDLT. It was a double clamshell design, with the meat and bun on one side and the lettuce and tomato on the other. The gimmick was that the hot side stayed hot and the cold side stayed cold till you were ready to eat it. With such a frivolous waste of non-renewable styrofoam, it was a marvelous example of the marketing of excess. At least we got a cheesy commercial with a pre-Seinfeld Jason Alexander out of it.

The wastefulness of the McDLT was obvious to me, even as a fourth grader. And since I’ve never been the kind of person to sit back and let bad things happen, I decided to do something about it. With a little help from my mom and dad, I typed up a petition asking McDonald’s to quit using styrofoam boxes. With a letter and a few sheets of blank paper, I went around the playground and got my friends and classmates to sign it. I probably collected a few dozen signatures. I even got a couple of teachers to sign it.

A year or two later, McDonald’s phased out its oversized styrofoam boxes, replacing them with paper wrappers and thin cardboard boxes. It was a minor victory for the environmentalist movement, and while I doubt that my petition alone convinced them to change, I’d like to think I played a small part in the affair. If nothing else, I added my voice, and the voices of my schoolmates, to a growing choir of people who saw the McDLT for what it was: a wasteful gimmick.