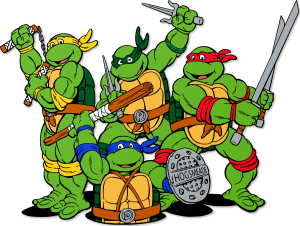 The Teenage Mutant Ninja Turtles clad in the colors of their respective Hogwarts Houses: Michelangelo in Hufflepuff Yellow, Raphael in Slytherin Green, Donatello in Ravenclaw Blue and Leonardo in Gryffindor Scarlet.

Before we go into archetypes, let’s look at the Ninja Turtle sorting we came up with. As the leader of the four, Leonardo would be in Gryffindor, since Gryffindor values bravery and leadership. Donatello, the nerdiest Ninja Turtle, would be sorted into Ravenclaw, the Hogwarts House for smart witches and wizards. Michelangelo, the “dumb” party-dude turtle, would be in Hufflepuff, which is the “remedial” House of Hogwarts. Raphael would be in Slytherin. Now this House has a reputation for being evil, but not all Slytherins are evil. Some are just ambitious and aggressive. Raphael is the “cool but rude” one. Hence, Slytherin.

Archetypes are the stock characters in our collective unconscious. Our brains are hardwired to categorize people into broad personality types. This helps us deal with people that we don’t know very well, but it’s also a boon to storytelling, as writers can manipulate these archetypes to create characters that we instantly bond with.

Archetypes in Other Franchises

There’s no definitive list of archetypes, but there are patterns. One of the most common patterns used in story telling is that of the foursome. With four core characters, you can have endless dynamics and stories. Most archetypal foursomes follow this patter: the Leader, the Genius, the Schemer, and the Fool. We can see these stock characters in both Harry Potter and Teenage Mutant Ninja Turtles, but they occur over and over throughout fiction.

Take Seinfeld, for example. Jerry’s the Leader, George is the Schemer, Kramer’s the Fool and Elaine is the smart one. You can see in on The A-Team as well, with Hannibal as the leader, Face as the Genius, Murdoch as the Fool and Baracas as the Schemer (or in this case, the Fighter.) You’ll find the same archetypes in South Park, The Wizard of Oz, Sex and the City, The Hangover, and countless others. You can even see this same foursome in shows with ensemble casts. For example, within Harry Potter, the characters are classified into the four archetypal Houses of Hogwarts. But even within Gryffindor, we can see the same roles pop up amongst Harry and his friends. Harry is the Leader, Hermione is the Genius, Ron is the Schemer and Neville is the Fool (at least in the earlier books).

The Mysticism of Four

These same four archetypes pop up over and over throughout literature and history. Besides the characters of the stories we love, you can find them in such categorizations as the Four Elements, the Four Humors, the Four Seasons and the Four Cardinal Directions. The Native Americans view four as a sacred number, and I think there’s something to that. As I said before, these basic groups of four are hardwired in our brains, and they can be a great way to create characters with whom we can instantly relate.

Can you think of any other major works of fiction that use these four archetypes? How about ones that break the mold? Let me know in the comment section.