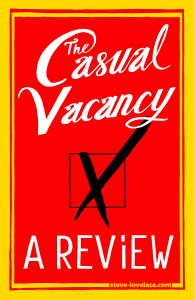 J.K. Rowling has come out with her first post-Harry Potter book, The Casual Vacancy. And while it’s not fair to compare the book to Harry Potter, it’s almost impossible not to do so. Perhaps years from now, when Rowling has written many more books, it’ll be possible to judge The Casual Vacancy by its own merits. But until that day were going to have to compare them just a little bit.

Harry Potter is escapist by its very nature. The story starts with Harry escaping his Muggle (non-magical) family. The Casual Vacancy, on the other hand, stays in the same charming little shithole for the whole story. This is the big problem with the book. The problem is that local parish council elections are not interesting. Rowling is a hell of a writer and I look forward to reading her future stories but the source material is just friggin’ dull.

Like most fantasy series, Harry Potter‘s characters have to choose between good and evil. But The Casual Vacancy blurs the line between heroes and villains. This can make for good literature, but the moral ambiguity of all the (living) characters makes it harder to “root” for anybody. It’s a fascinating look into small town England, but The Casual Vacancy is not the kind of story you’ll want to read again and again. Still, I’m glad J.K. Rowling wrote it, and I look forward to her next project. I will always be a fan of hers, and I’m excited to see where the Muse leads her next.

Have you read The Casual Vacancy? If so, let me know what you think in the comment section.