The People’s Almanac and Book of Lists 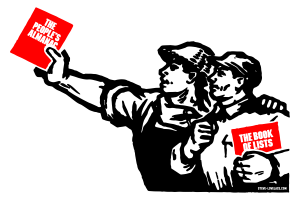 I’ve always been a big fan of trivia and random facts, as the eclectic nature of this blog will attest. Nowadays I get most of my random trivia from the Internet, sites like Cracked and Mental Floss or whatever I find on Twitter or Reddit. But long before the Internet, I got my trivia from books. Trivia books are a dying genre, replaced almost entirely by the Internet. But back in the day, they were a staple of my morning breakfast routine. Of all the trivia/random nonfiction books out there, my favorite were The People’s Almanac and Book of Lists series by David Wallechinsky and Irving Wallace.

Irving Wallace was a bestselling author who liked to write about working class Americans and other types of “underdogs”. Wallace included a lot of random facts and trivia in his novels, so eventually he teamed up with his son, David Wallechinsky, to compile all the random facts into an almanac. The result was a book of facts with a twist. Like a regular almanac, it had data about every country in the world, but unlike a normal almanac, it lumped major corporations like IBM and Coca-Cola in with the countries. I thought this was dumb at first (and maybe it is), but it influenced how I think about multinational corporations in a globalized world. For this reason alone, my Corporate States of America map probably owes a lot to The People’s Almanac.

The Book of Lists

Modern clickbait sites like BuzzFeed and Cracked focus on “listicles”, short articles presented as a numbered list. Such sites are a staple of the modern Internet, but lists have always been popular. The Book of Lists series featured the same kind of content as The People’s Almanac, but in short, easy-to-digest articles. These made for the perfect bathroom read, and a good introduction to the weirdness of the world we live in.

The Book of Predictions

The Book of Predictions was by far the weirdest. It followed the same format as the other books, with predictions from an array of psychics, scientists and sci-fi authors. The book kept me awake at night worrying about the Third Prophecy of Fatima or the Prophecy of the Popes. But as much as the book scared me, I kept reading and of morbid curiosity. As time passed, I realized how goofy the prophecies were. Every single one of them was wrong. Looking back on it now, there’s nothing in there predicting the Internet, even though the underpinnings of the Internet existed back then. Like the other books in the series, The Book of Predictions is a great read, even if you like it ironically.

While Irving Wallace has passed away and David Wallechinsky is getting up there in age, I would love to see The People’s Almanac and Book of Lists revived as a modern website. I think that there’s definitely still a market for such material, even if it’s not in book form.

Did you ever read any of The People’s Almanac books back in the day? If so, what did you think? Let me know in the comment section.