The Hunger Games: A Review

This is a review of the entire Hunger Games trilogy. It contains major spoilers for those who haven’t read all three books. 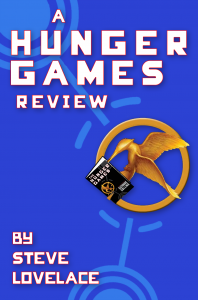 I came late to the Hunger Games franchise. It wasn’t until the movie opened that I finally found out what it was about. I liked the movie, so I quickly moved on to the books, devouring all three of them in the span of 48 hours. I really liked the writing and the story, though a few points stuck out in my mind, namely, the focus on makeovers, the love triangle and the economics of District 12 and Panem as a whole.

Throughout the trilogy, Suzanne Collins spends a lot of time discussing Katniss’ elaborate outfits and makeup. Of course, since the books are primarily written for teenage girls, this makes sense. Still, I had to wonder if a girl being led off to battle and slaughter would be so interested in makeovers. At first I thought not, but after thinking about it for a bit, I think Katniss’ reaction is appropriate. I think that, faced with such unbearable evil, she has to focus on the routine of dressing and grooming in order to maintain her precarious grip on sanity.

When it comes to the love triangle, I would put myself in the camp of Team Someone Else. Neither Peeta Mellark nor Gale Hawthorne is a good match for Katniss. If I had to choose, I’d go with Peeta, though. Gale seems to turn into a quasi-war-criminal in the later parts of the story, helping Beetee design traps to kill innocent civilians (including Katniss’ sister). That’s a pretty big turnoff. But while Peeta is a good guy (even after being tortured), I never feel that the chemistry is there, not even in the epilogue. Maybe that’s the point.

Not every relationship is built on torrid romance. Sometimes people get together (and stay together) out of convenience. On the other hand, the best marriages are built on friendship, not passion. Who am I to second guess Katniss Everdeen’s choices? While I may not approve of her decisions, Suzanne Collins does a pretty good job of making me feel like she’s a real person.

The Hunger Games is a first-person narrative, so everything in the story is filtered through the eyes of Katniss Everdeen. And while Katniss isn’t an economist, we can infer a lot about the way that Panem’s economy works. Essentially each of the 12 subjugated districts focuses on one major industry: District 12 focuses on coal mining, 11 on agriculture and 4 on fishing, for example. This hub-and-spoke economic model makes sense, because it keeps the districts dependent on the capital. However, the dependency is mutual. So when Katniss learns of a seafood shortage in the Capitol, she infers that District 4 is in rebellion.

This makes me wonder about the wisdom of wiping an entire district of the map. When the Capitol obliterates District 12, does it have plans for an alternative energy policy? Without coal, how can either side continue to function? Especially when, at the end of Mockingjay, Katniss mentions that District 12 is switching its economy to agriculture and pharmaceuticals. My best guess is that District 13, which originally specialized in nuclear weapons, has developed a nuclear energy plan to keep the new, democratic Panem from relying on coal.

Overall, I am very impressed with the franchise. I like stories where we only see a glimpse of what’s really going on. Like Ernest Hemingway’s iceberg theory, there’s a lot of story beneath the surface. How did we get to Panem? Where will we go? By viewing a revolution through the eyes of a teenage girl, we can get a more realistic view of what it’s like to live in turbulent times.