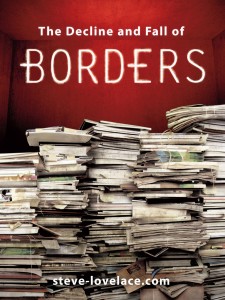 Back in the 1990s, a lot of book lovers bemoaned the death of the small, independent bookseller. They thought of the big chains like Borders and Barnes & Noble as the enemy. This was best exemplified in the 1998 romantic comedy “You’ve Got Mail”. But to me, the Golden Age of Bookstores was just beginning.

As a kid, my mom used to take me to the library in Dupo, Illinois. It was a small little library, but they had a pretty good selection. I was an unusual kid, and my favorite part of the store was the reference section. Since you couldn’t check out the reference books, I spent a lot of time sitting in the reference aisle reading the encyclopedia. My sister, who was still reading picture books, hung out in the little kids’ section. But we both gained a strong love for reading and learning that we retain to this day.

The archetypal “Mom and Pop” bookstores were long gone by the time I learned to read. This was the 1980s, and the mall was where it was at. I loved going to the mall as a kid, usually South County Center or the now-defunct Crestwood Plaza. I hated going clothes shopping with my mom and sister, but I put up with it so I could go to the mall bookstores, usually either B. Dalton’s or Waldenbooks. (To this day, I don’t remember any difference between the two.) I liked these bookstores because they had newer books than the library, and if I begged and pleaded hard enough, I could sometimes get my mom or dad to buy me something. To me, it was more fun than the toy store (though I also enjoyed that quite a bit.)

My family moved to Michigan in the early 1990s, and I upgraded to a bigger and badder library, one with several floors of books to peruse. Not long after, I discovered the Big Box bookstores. I don’t recall the first time I went to Barnes & Noble, but I quickly became enamored with the place. I also fell for a local Big Box store called Schuler Books. It has a cool combination of coffee and books that really drew me in, so I started spending a lot of time there in the big, comfy chairs. Both of these Big Boxes were in Okemos, several miles from my house, but I liked them enough to ride my bike there when I could, or beg my parents for a ride.

The 1990s Big Box stores were quite small by modern standards, and soon both bookstores expanded their presence. Schuler Books opened a new location at Meridian Mall and Barnes & Nobles opened a two-story store in downtown East Lansing. A year or two after that, Schuler opened a location just north of Lansing, while Barnes & Nobles built a store at Lansing Mall. Now I had four stores to choose from in the Lansing area. And since I was an adult with a car by this point, I could drive out to other locations. My favorite “road trip” bookstores were the Barnes & Noble in Grand Rapids and the Borders in Ann Arbor. I spent a lot of Saturday nights at Schuler Books, probably more than a college-aged kid should have.

For me, the Golden Age of Bookstores ended on February 3, 2006. That was the day that I moved from Michigan to American Samoa. I was shocked to discover that there were no bookstores on-island. There was a decent-sized library, but nowhere I could get a latte and chill. It was one of the things I missed most about living in Samoa, and as soon as I got back to the mainland, I drove my rental car to the Schuler Books in Lansing. I was ecstatic and overwhelmed. I simply didn’t know where to start. After 20 minutes, I had barely picked up a book. It was great to be back, but somehow, it just wasn’t the same.

Coming back to the mainland US, I got a new job and a new apartment. Such big life changes are expensive, so I didn’t have much money to spend on books. I didn’t have much time, either, as I had made friends and built a life for myself in Dallas, on that didn’t involve Saturday nights at the bookstore. And as sad as I am to admit this, I stopped reading so many books in general. After all, there’s a lot of stuff, good and bad, to read on the Internet. I think this is an important factor in the fall of the big bookstores. Amazon.com and e-readers have done a lot to chip away at Big Book, but I think that people also spend a lot more time reading blogs and websites nowadays. I know I do.

Borders went under in 2011. I was sad about the loss, but when I looked back, I realized that I hadn’t been a regular customer in several years. Ditto Barnes & Noble. In fact, at the surviving Big Box chain, there aren’t any more comfy chairs. There are more discount “remainder” books and sometimes even used book sections. And of course, there are e-readers (though those too have been a boondoggle for Barnes & Noble). At least there’s still coffee.