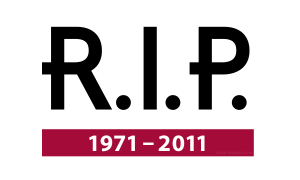 I went to Borders the other day, during their closing sale. It was in such a sorry state that I couldn’t stay long. The store was technically still in business, but it was a shell of its former self. The shelves were half-empty, the armchairs were all stacked up in the corner, and garish “store closing” signs covered every inch of empty space. The atmosphere that had originally attracted me to the store was gone. It really makes me shake my head and wonder what happened.

I can’t help but feel a little responsible for Borders’ demise. I used to shop there all the time, even just a couple of years ago. But now I can’t remember the last time I spent money there. Back in the day, I used to go there two or three times a week. Half the time I ended up buying something. But a couple of years ago, I found myself buying fewer books there. Then I found myself going less often. I was reading a lot more stuff online, for better or worse. For someone like me, who is a fan of nonlinear nonfiction, it was a easy to switch away from books.

Fiction was another matter. Since the days of Dickens, the novel has been the “killer app” for the mass-market book. Reading a novel on a computer screen is tedious. But now that e-readers like the Kindle and Nook have become popular, this last bastion of the printed word is starting to fall. While I’m certain that paper books won’t go away altogether, they will eventually be relegated into a niche applications, much like parchment, scrolls and stone inscriptions.

I have to wonder what role Seattle’s Best Coffee played in Borders’ demise. I think it was a factor – not the main factor – but it certainly didn’t help. In case you don’t know, Starbucks owns Seattle’s Best. Originally a chain of its own, it was purchased by its fellow Seattle chain in 2003. The following year, Borders signed an agreement with Starbucks to convert all its in-house cafés into Seattle’s Bests. This was probably done in response to Barnes & Noble’s cafés serving Starbucks coffee, but Borders would have done better to sign with another company, such as Peet’s or Caribou.

The problem was that after Borders signed its agreement with Seattle’s Best, Starbucks decided to market Seattle’s Best as a “discount” brand. This is not uncommon in the corporate world. Hyundai has Kia and the Gap has Old Navy. This brand-positioning benefits Starbucks, since it allows them to sell coffee at places like Subway and Burger King without diminishing their primary brand. However, Borders was not a discount brand. So the pairing of expensive books and cheap coffee did nothing to improve the customer experience.

A couple of years ago, as Borders first started to falter, they decided to try out some concept stores that put the focus on a “digital lifestyle”. This amounted to a couple of computers in the middle of the store where you could download songs to certain music players or burn CDs, something you can do just as easily from home. More annoyingly, this revamped store had TV screens playing clips from cooking and travel shows, trying to sell the books that way. I found this very annoying. The TVs were distracting and the clips played on a fairly short loop. I think that this is a good example of just how out of touch the company was. While Barnes & Noble was selling Nooks that people could take home with them, Borders was still trying to be a “destination” long after the writing was on the wall.

Many factors contributed to Borders’ demise. The move away from physical books and media, the disharmonious co-branding with Seattle’s Best and bad decisions on behalf of the company’s management all made a pretty big dent in the company’s fortunes. This, combined with the broad effects of the Great Recession, probably doomed the company a couple of years ago. Still, it’s sad to see it go, even if I stopped being a regular customer several years ago. Though I wholeheartedly embrace the digital age, I’m going to miss the era of the big box bookstore.