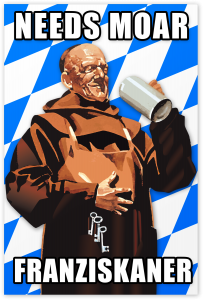 Every year, my friends and I go to the Oktoberfest in Addison, Texas. Addison is a suburb north of Dallas that contains a gazillion bars and restaurants. Addison Oktoberfest is big, taking up almost nine acres and attracting almost 70,000 people each year. Even though it’s just a few miles away from Dallas, we like to book a couple of hotel rooms so we can drink and enjoy ourselves without worrying about how we’re going to get home. There’s a lot to see and do, so it’s nice to make a night out of it.

After drinking too much beer and eating too many bratwurst, my friends and I like to ride the carnival rides till we’re sick. (It usually doesn’t take that many.) My favorite is the Starship 2000, which is one of the centrifuge rides that adheres you to the wall with artificial gravity. Then there are the topsy-turvy upside-down rides like the Kamakaze. After riding on one of those, you won’t want to drink anymore, so they can be pretty helpful when it’s time to sober up. (Though since we stay in a hotel around the corner, sobering up is not a big concern.)