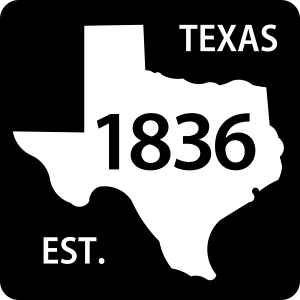 I’ve been living in Texas for over five years now, and it’s an interesting place to live. I never planned on living here this long, but at least for the foreseeable future, I don’t have any plans to leave. In any case, let me celebrate the anniversary the way I celebrate everything else: by spouting useless trivia and pointless observations.

When Texas was admitted to the Union, the plan was to divide it into five states. Because of the antebellum balance of power between free and slave states, this never happened. Yet geographically and culturally, it really does function as at least five regions. Hilly, liberal Central Texas is a lot different from the flat, conservative North. Driving from Dallas to Austin is a lot like going from one European country to another.

Texas Was Its Own Country

Texas was an independent republic for a couple of years. After the Texians (as they were then called) gained their independence from Mexico, they established their own English-speaking republic north of the Rio Grande. Unfortunately, the War of Independence from Mexico left the new republic’s economy in shambles, so they joined the United States in exchange for their debt. Many people here in Texas think that this is the only state that was independent. That’s not true. Vermont and Hawaii with both independent for years, and California was independent for about a week.

Another myth that’s common here in Texas is that this is the only state that can fly its flag at the same height as the Stars and Stripes. In reality, there is no Federal law about this issue. However, in most of the states I’ve visited, the state flag is either on the same pole as the US flag, or on a slightly shorter pole. Here in Texas, it’s much more common to see the state and federal flags on equal sized poles. This is far from universal, but anecdotally, it seems more common. I’d be curious to see an actual study on the issue.

Many countries have semi-autonomous regions that color and define the nation as a whole. What would Great Britain be like without Scotland, Spain with Catalonia, or Germany without Bavaria? All of these countries are richer for their tenuous unions. Likewise, America wouldn’t be the same without Texas. It’s a fascinating place, and if you get the chance to visit, I highly recommend it.