Marketing Gimmicks That Need to End

Having worked in marketing for a number of years, I keep seeing the same mistakes made over and over. When it comes to gimmicks, some approaches have stood the test of time, like the basic bandwagon approach or the celebrity endorsement. But other marketing gimmicks need to stop as soon as possible. Here are a few of the most egregious offenders. 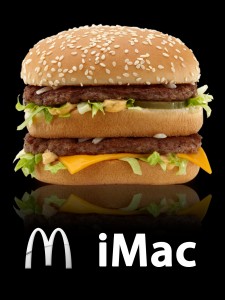 Thankfully, McDonald’s is not one of the companies trying to copy Apple.

Apple first came out with the iMac in the late 1990s. Almost immediately, other companies started slapping a lowercase “i” onto their product names. This trend might have died off in the early 2000s, but Apple kept expanding its iDevice line: iPods, iPhones and iPads all became common household items. And so, a decade and a half later, marketers still try to use the letter “i” in their names. But it doesn’t work for anyone but Apple. Even if you can get away with it from a legal standpoint, Apple owns the “i” prefix, at least in the minds of millions of consumers. If you try to use it, you just look like a knockoff copycat.

The “swoosh” is the bane of graphic designers everywhere. There are hundreds if not thousands of logos with a curved line that’s supposed to convey dynamic motion, or something. (Capital One Bank is one of the worst offenders in this regard.) As with the “i” prefix, there is only one company that can pull it off: Nike. Nike was the first company to “own” the swoosh, and the way the use it, without adornment, makes it unique to that company. As with the “i” prefix, it makes everyone else look ridiculous.

Unlike the previous gimmicks, misspelled brand names has been around as long as there’s been misspelling. Two of the most common include using “K” for “C” or “KW” or “QU”: “Kwik-E-Mart” instead of “Quickie Mart”. And while this idea is timeless, it has become more common in the age of the Internet. There’s a finite number of dot-coms out there, and it’s tempting to register “Flickr” if “Flicker” is already taken. But unless you’re a major website the size of Flickr or Tumblr, you’re going to have a hell of a time getting people to google you. Google is designed to correct spelling mistakes, so if you create a social network called “Phacebook”, your users will have to double check to make sure that Google didn’t send them to Facebook. (Of course, if you made a social network called “Phacebook”, you’d probably have a lawsuit on your hands, but that’s another story.)

There are hundreds more hokey gimmicks out there, and thousands more ways to screw up your marketing and branding. Which ones do you hate the most? Share your ideas in the comments section.