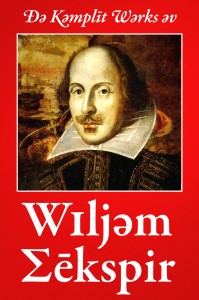 English Spelling is screwed up. Though if you’re literate enough to read this sentence, you probably already know that. Even if you won your elementary school spelling bee, you’ve almost certainly come across words that are tough to spell or hard to pronounce. The real question is, what can we do to make it more logical? I’ve given a lot of thought to the matter and come to the conclusion, not much.

On the surface, spelling reform seems easy. All we have to do is take words with funky spelling, like “through”, and rewrite them more phonetically: “thru”. Or we could take “though” and rewrite it “tho”. Makes sense, right?

One problem, though. The “th” sound in “think” is different than the “th” in “they”. The latter is voiced, more like a “d” than a “t”. It would be more correct to spell it “dho”, as odd as that spelling looks to native English eyes.

So imagine that we change every voiced “th” to a “dh”, every “the” to a “dhe”. We’re still left with two letters representing one sound. This would cause a problem in words like “hardhat”, where the “d” and “h” represent two different sounds. To get around this, we’ll have to invent some new letters, or at least borrow them from another language, like Icelandic. Thus “through” becomes “þru” and “though” becomes “ðo”. Meanwhile “hardhat” becomes “hardhæt” (notice the two different “a” sounds.) With just this one little fix, most every word in the English lexicon changes.

When it comes to spelling reform, it’s very easy to fall back on the reducto ad absurdum argument. We can make spelling reforms without making English look like a foreign language. With such a large corpus of written work, English spelling has become very resistant to change. Our best bet is to change I couple of the worst offenders, like anything containing “ough”. Much of this change is occurring organically. For example, “through” is already “thru” on most street signs. I suggest we stick with it and use “thru” in all of our correspondence.

What do you think about spelling reform. More? Less? None? What’s a good amount of change to make English easier to use?