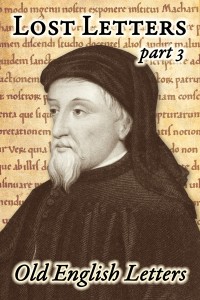 In previous installments of this series, we’ve looked at letters of the alphabet made and lost in the days of ancient Greece and Rome. Now let’s look at some of the Old English Letters that never made it into our modern alphabet.

After the Fall of Rome, the Latin Alphabet gradually spread across Western Europe, where it mingled with Germanic Runes. By the time the Anglo Saxons had conquered England, they had added several new letters to their alphabet. These included Ash (Ææ), which represented the /æ/ sound in the word “cat”, and Wynn (Ƿƿ), which was yet another way to write the sound /w/. The Anglo-Saxons also had two ways to write “th”: the runic letter Thorn (Þþ) represented the unvoiced /θ/ sound in the word “thick” and the Latin-derived Eth (Ðð) represented the voiced /ð/ sound in “father”. (At least in theory. Medieval spelling was far from consistent.) Æ, Ð and Þ are still used today in Icelandic, though Ƿ has completely lost out to W, which as the name implies, was originally written either UU or VV.

Some of these Old English letters would be useful in the modern day. So why did we drop them? Two reasons. Remember that English wasn’t always the linguistic powerhouse it is today. When the Normans conquered England in 1066, they continued to speak French for several centuries. By the time the English noblemen started speaking English, printing presses started to appear. Most of the printing presses — and the little pieces of lead type — were made on the Continent. This meant that English printers had to make due without the native English letters. After a while, the native letters disappeared entirely.

In a twist of irony, the English alphabet is now influencing other languages. Inventions like typewriters, telegraphs and basic ASCII character sets have made it harder for many languages to use anything but the 26-letter standard. The invention of Unicode characters is changing this, but the historical influence of ASCII remains.