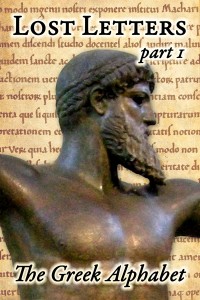 Why does the English Alphabet have 26 letters? There’s nothing magical or important about that number. In fact, there’s nothing special about the 26 letters we ended up with. It’s just an accident of history. Nobody designed the alphabet we use today. It evolved organically. And like any product of evolution, it leaves in its trail a myriad of dead ends. There are many letters that never quite made the cut. Let’s take a look at some of these lost letters, starting with the Greek Alphabet.

The Greek Alphabet evolved from the Phoenician writing system. This was less than ideal, since Phoenician was a Semitic language with a very different sound inventory than Greek. This left letters without sounds and sounds without letters. For example, the letter Koppa (Ϙϟ) represented a guttural /q/ sound that didn’t exist in Greek. It didn’t exist in Latin or English either, but somehow it’s survived into the modern alphabet as the letter Q. Less lucky was the letter San (Ϻϻ). This letter sounded like /s/ and looked like an Mu (Μ), so it went away pretty quickly.

Additions to the Greek Alphbet

To fit the Phoenician Alphabet to the Greek Language, the Greeks had to invent several new letters. Some of these, like Phi (Φφ), Chi (Χχ), Psi (Ψψ) and Omega (Ωω), have survived into Modern Greek. Others have fallen out of favor. Some of these forgotten Greek letters include Heta (Ⱶⱶ), which made an /h/ sound and Sampi (Ϡϡ), yet another way of writing the /s/ sound. Like the letter San, Heta and Sampi didn’t make it into the Latin Alphabet, though the half-H shape of Heta was later revived by the Roman Emperor Claudius.

In the next installment of the Lost Letter series, we’ll take a look at Claudius’ attempt to add new letters to the alphabet. Then we’ll look at the letters developed and lost in Medieval England, followed by modern attempts to add new letters to the alphabet. Looking back at all of the letters that have been lost, it’s amazing that our alphabet only has 26.