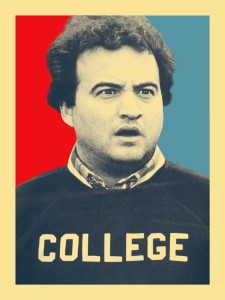 Back when I was freshman at Michigan State University, the Princeton Review ranked my school as the number three party school in the country. It was all the talk around campus, as people debated the dubious distinction. I thought it was unfair, since most of the other highly-ranked party schools weren’t known for their academics. And the very next year, we fell off of the list entirely. Still, MSU was and is pretty well known for its crazy college parties.

While parties are common at most colleges, Michigan State also had its fair share of riots. These usually took place is a dilapidated student ghetto called Cedar Village. Every couple of years, we would win/lose a big basketball tournament, and students and fans would pour into Cedar Village to celebrate/mourn. Then the East Lansing Police would come in with riot gear, and lo and behold, a riot would start. And even though many of the rioters weren’t even students at Michigan State, the riots always made us look bad. Afterward the student government would talk of change, but nothing would come of it. Four or five years later, once a new generation of students moved in, there would be another riot.

I still don’t think that Michigan State University deserves its reputation as a party school. A lot of this ill-repute came from the quadrennial riots and the large student body living in a suburban town. Still, I have no regrets about my alma mater. Looking back almost a decade after graduating, I look back with fondness, at least for the parties. I don’t miss the riots, but then again, I don’t see them as anything unusual.