My First Day of College 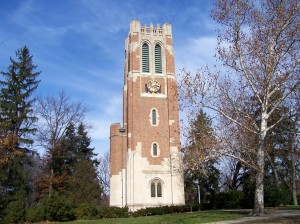 I still remember my first day of college. I got up early and rode my bike across campus. Along the way, I stopped at a pedestrian bridge over the Red Cedar River, watching people come and go on a beautiful autumn morning. There was just something amazing about the hustle and bustle of the first day of college. I loved the excitement in the eyes of every freshman, and I knew the same look was on my face too.

When I went to Berkey Hall, people were waiting in the hall outside a locked classroom. An older woman approached us, and everyone thought she was the professor. She wasn’t. She was a freshman like us. I had to remind myself that college wasn’t limited to people between 18 and 22, and in fact, I got another age-related shock a moment later. A young woman, probably not more than 23, came up, unlocked the door, and started talking to us all in French. She was the TA, and she was surprisingly young.

After an hour of French, I headed to my second class in North Kedzie Hall. I walked into a large lecture hall, and recognized it right away. It was the same lecture hall where I had a seminar in my eighth-grade summer science program. The professor was a little short bald guy with the same name as a famous football coach. He alternated between mumbling and shouting, all the while talking about the similarities between Jesus Christ and Karl Marx. It was unlike anything I had heard in high school, and I liked it.

Another difference between college and high school was the timing of the classes. I had a long afternoon break before my 7pm class. It was astronomy, a subject I had always found fascinating. Except now. This professor was so dry and boring that I had trouble staying awake. It didn’t help that is was the evening, and I wasn’t used to going to class so late. Still, this guy would have been awful any time of the day.

My first day of college really wasn’t a very eventful day. It was just a typical day at class, memorable only for being first. That’s a plus in my book. We often look back on the big events in life, forgetting the everyday routine that we live in. But that everyday routine makes up the bulk of our lives, and we would do well to remember what it was like.