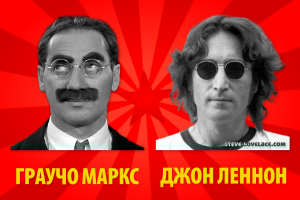 It was my first month on campus, and I was still getting settled into my routines. I stopped by the International Center to grab some lunch after class, and that’s when I saw a guy handing out pamphlets. Or rather, he saw me. Before I could walk away, he started talking to me, telling me about Communism.

If the guy had been a preacher or missionary, I would have gotten away quickly, but instead I stopped to talk to him. A bone fide communist. This was the late 1990s, and Communism had just suffered a fatal blow a few years before. So encountering a communist on campus was like running across a rare panda or some other endangered species. I had to talk with the guy for a few minutes just to see if he was serious.

He was indeed serious. Very serious. In fact, he seemed to have no sense of humor at all. But he didn’t mind an argument. Since I had just joined the student government, I was looking for a good debate. I brought up the fact that Communism had simply failed in country after country. He told me that it was Stalinism that had failed. The brand of Communism in Russia and Eastern Europe came from the ideologies of Josef Stalin, who had corrupted the “pure” Communism of Marx and Lenin.

I brought up the fact that Lenin, not Stalin, killed the Russian royal family. He just shrugged and started telling me about Leon Trotsky. That was when he got the really crazy look in his eyes. Trotsky had it all figured out, he told me, and if I’d sign up for his email list, he would give me a copy of his newsletter so I could see the truth for myself.

I didn’t want my name on any crazy Trotskyist mailing list, so I politely declined. Then I got the hell away from him. It turned out the Campus Communist wasn’t much different that the crazy preachers out by Wells Hall. He wasn’t any different than the other right and left extremists on campus. In reality, the Campus Communist was just another ideologue. He wanted to tell me what was right and wrong, and he wasn’t looking for a conversation.

Have you ever met a real, honest-to-(the-lack-of)-God communist in the modern day? If so, tell me your story in the comment section.