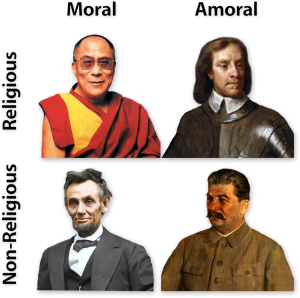 The Dalai Lama recently said that religion isn’t enough. He says we need something else to boost moral and ethical thinking in the world. I agree with this statement. While we have traditionally connected religion and morality, the two are completely separate. To see this, all we have to do is look at the people.

We can see the (lack of) connection between religion and morality with a simple 2×2 matrix. On one side, we’ve got religious vs non-religious people, and on the other side, moral vs amoral people. Now I understand that these are subjective attributes, and that there’s a lot of gray area involved. With that in mind, let’s fill the matrix with the most obvious examples.

With examples from all four squares of the matrix, we can see that there is no correlation between religion and morality. If there was, we would expect one or more squares to be blank. Specifically, we would expect there to be no amoral religious people and no moral non-religious people. But there are. The existence of such people is evidence that religion is not enough to keep us on the righteous path.

Do you think there’s a correlation between religion and morality? Let me know your thoughts in comment section. And since religion is always a hot topic, make sure to keep it civil.