The iPhone and the Tricorder 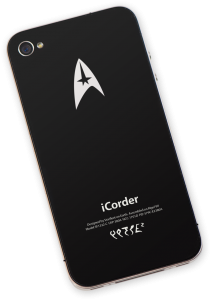 When Apple debuted the latest iPhone a couple of weeks ago, many tech pundits were disappointed that it was an evolution rather than a revolution. Realistically we know that not every product can be a game-changer, but Apple’s set a high bar for themselves. They’ve created so many innovative products over the years that we’re disappointed with the average, or even the slightly above average. Some people say that the mobile tech market has matured, but I think there’s a lot of room left for innovation. I think that a lot of the advances if the next few years will come from specializations in hardware and software. This may be bad news for Apple, as mobile devices become more like the tricorder from Star Trek.

The Influence of Star Trek

A lot if modern tech products take their cues from Star Trek. Captain Kirk’s communicator looks an awful lot like a flip phone and Captain Picard’s tablet looks like an iPad. But what about Spock’s tricorder? Tricorders are handheld devices with a variety that collect a wide array of scientific data. Spock uses one when exploring new planets, and McCoy uses a special “medical tricorder” in Sick Bay. So we know that such devices are not universal. Rather they’re specialized. And each one looks vaguely like a smart phone.

I can see phones (or phone-sized tablets) being adapted for a wide variety of scientific uses. Already there are things like microscopes that attach to your iPhone camera lens, but I can think of much more. Imagine an infrared camera or a mass spectrometer. Maybe even a Geiger counter. Outside of the laboratory, imagine a credit card swiper, a shortwave radio receiver, a handheld scanner, or a stereoscopic (3-D) camera. While I’m sure there are already a variety of gadgets you can hook up to your phone, right now you have to connect such devices via a cord or a radio signal. This can be awkward for in-the-field applications. What if such functions were build into the device.

Most people don’t want or need an infrared camera built I to their phone, much less a Geiger counter, but imagine if such devices were modular. Desktop computers have been modular since the 1970s, since they’re big and easily tinkered with. Laptops, in comparison, aren’t meant to be tinkered with, but there is still a wide variety of hardware options available. Likewise, I can imagine a smart phone or tablet with a removable camera. Or one with a general-purpose slot that would allow you to add an array of specialized instruments. Such devices will probably run some sort of Android operating system. Why? Because Apple is stuck in a one-size-fits-all paradigm. Such rigid thinking may lose them business in the future and put them behind in innovation, as people think of new and exciting uses for mobile technology.

Do you think that phones will become more like tricorders? Let me know your thoughts in the comment section.