Going to College with a Blueberry iMac 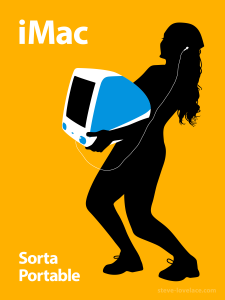 Despite its compact shape, the original iMac was not easy to lug around.

I’ve owned a number of computers over the years. Growing up we had an old Tandy 1000HX, a Frankenstein 386 and an Apple Performa 6200. All of these were family computers. Though I was the primary user, I still had to share with my parents and sister. But when I went off to college, I finally got a computer that was all my own. It was a Blueberry iMac.

Steve Jobs returned to Apple in 1997 on a quest to bring the company back from the brink of death. After cutting staff, killing projects and making a Faustian bargain with Bill Gates, Apple was finally ready to reinvent itself. Their new NeXT-based operating system, Mac OS X, was still a couple of years out, so they would have to make the most out of existing hardware and software. In an era where virtually all computers were beige, Jobs and company decided to go with something more colorful, the “Bondi Blue” iMac.

The iMac was the first iDevice. It was an all-in-one unit with a built-in CRT monitor. Working around the bulky CRT, Apple designed an “alien egg” shaped device that was encased in translucent white and “Bondi Blue” (aka turquoise) plastic. It was utterly different from anything else on the market, and this colorful machine put Apple back in the black. In fact, it was so successful that a little while later, Apple introduced a second generation in five different fruity colors. The green machine was tempting, since I was going to Michigan State, but in the end, my love of the color blue won out.

More Than Just a Pretty Face

The most revolutionary thing about the iMac was its facade. But there was more to the story than a colored faceplate. The iMac was a legacy-free machine. Apple cut out most of the old ports, such as serial, parallel, ADB and SCSI, and replaced everything with the brand new USB. On one hand, this made it hard to connect to existing printers, mice and keyboards. But given that iMacs were selling like gangbusters, there was soon a glut of new USB devices on the market.

The iMac started a trend of Apple getting rid of ports that continues to this day. But the biggest loss wasn’t the ports; it was the lack of a floppy drive. Floppies were slow devices that didn’t hold much data, but in a world of dial-up internet, they were still pretty vital to sharing files. USB floppy drives, often in iMac-like colors, soon became some of the bestselling peripherals. But I didn’t buy one thanks to another new feature. My iMac had Ethernet built in. While all my classmates were out buying network cards, I just plugged in my computer and enjoyed the dormitory’s new broadband internet.

There were definite pros and cons to owning an iMac in the late 1990s/early 2000s. As silly as it seems to me now, I really liked the way it looked. This was years before I figured out I wanted to be a graphic designer, but even then, I had an eye for design. I also really liked USB. There were lots of cool new peripherals and gadgets on the market, and even if I couldn’t afford most of them, I still liked seeing them at the computer store. I also liked the all-in-one design, so that I didn’t have a huge tangle of wires running everywhere. My Blueberry iMac allowed me to keep my desk neat and minimalist. The compact design also made it relatively easy to cart back to my parents’ house on a school break, though at 35 pounds (16 kg), it was far from portable.

While I was happy with my decision to get an iMac, there were a lot of things I didn’t like. Apple was not nearly as popular as it is nowadays, so I was the only guy on my floor who didn’t have a PC. And in fact, my classmates made of fun my fruity colored computer, implying that I wasn’t a real man just because I didn’t own a beige box. I didn’t let this faze me too much, but it was still tiring to hear. But the real issue with the iMac was how hard it was to get information on and off of it.

The iMac didn’t have a floppy drive. It couldn’t use existing SCSI drive and it had no internal expansion slots. There were three ways to get data on the computer and two ways to get it off. You could use the CD-ROM drive to get programs and data onto your machine, but the early generations of iMacs could only read CDs. They couldn’t burn them. That left the Internet (via modem or Ethernet) and the USB ports. While I had broadband in the college dorms, my parents still had dial-up. Moreover, there was no real cloud storage back then. Even emailing a file was hard. Finally, there was USB. At first USB drives were scarce. They soon because more popular, but with USB 1.1 ports, even reading a simple thumb drive was slow and frustrating.

No discussion of the iMac would be complete without a mention of the “hockey puck” mouse. This was the ultimate example of form over function. While the included USB keyboard gave me no problems, the mouse was a nightmare. It was designed as a perfect circle, reflecting Steve Jobs obsession with simple geometric shapes. It looked kind of cool, but the circular design made it hard to feel which side of the mouse was on the “top”. You always had to look down to make sure it was oriented correctly. Plus is was way too tiny for a big guy like me. I soon went out and bought a USB mouse from Microsoft. Not only was it mouse-shaped, it also had five buttons and the then-new optical technology. I ditched that damn hockey puck and never looked back.

My iMac suffered from 1.0 Syndrome. Later revisions came with USB 2.0 ports and rewritable CD drives. By the time I finished college, my machine was pretty out of date. I tried upgrading it to the new UNIX-based Mac OS X, though this just slowed down the aging processor. When I moved back home, I found myself using the family computer more and more. Then when my dad got a new computer for his law office, I inherited one of his old IBM machines. When it came time to move to Samoa, I sold my Apple with most of my other worldly belongs. I’ve had many machines since, mostly Windows PCs, but I still have fond memories of my old Blueberry iMac.

Did you own an iMac back in the day? If so, let me know your memories in the comment section.