My First Computer: The Tandy 1000HX 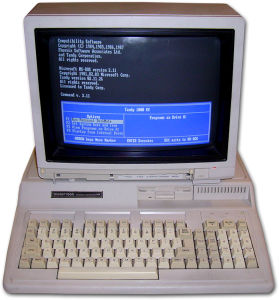 It was my tenth birthday. I spent the afternoon in downtown St. Louis with my dad. When I came home, there was a computer in the living room, a Tandy 1000HX.

“You got me a computer?”

“No,” said my dad. “It’s the family computer, not yours. It’s your birthday present, but not your computer. You have to share it with your sister.”

The computer was primitive by today’s standards, but even in 1990, it was far from top of the line. It had just 256 kilobytes of RAM, as well as a single floppy drive. However, it had MS-DOS burned into its ROM chips, so unlike the Apple IIs at my school, I didn’t need a special boot disk.

The Tandy 1000HX had more than just MS-DOS on its ROM chips. It also had GW-BASIC and an odd little shell called DeskMate. DeskMate looked like an odd knockoff of Microsoft Windows, but it didn’t require a mouse and didn’t have any third-party apps. Still, it was useful. It had a text editor, a primitive database, a drawing program and even a music composition app.

I had to share the computer with my parents and my sister, but i was still the system’s primary user. I had a lot of experience with MS-DOS and GW-BASIC, so I took to the computer like a fish to water. And though I’ve had many other computers over the years, I still have fond memories of my Tandy 1000HX.