Apple Inc. is one of the most successful companies in history, but they’ve certainly had their share of failures. From the earliest days with Jobs and Woz, to 1990s Dark Ages, to rise of the iPhone and the death of Steve Jobs, Apple’s successes have been matched only by their failures. As a student of history, I believe that such failures are important to study. Here are some of Apple’s biggest failures, and how we can learn from them. 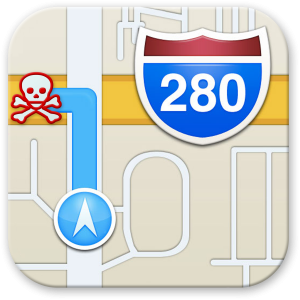 Even the icon for Apple Maps is a total failure, since it tells you drive off an overpass to certain death. Mind you, this is the same freeway exit Apple employees take every day to work. You think they’d get it right.

Last year, Apple changed its Maps app. Originally it used a specialized version of Google Maps, but with Google’s Android operating system challenging Apple for mobile supremacy, Apple wanted to break its reliance on Google. So they deleted the built-in YouTube App and made their owning mapping service. However, the new Apple Maps was terrible. Without Google’s ten-year start, Apple had to mine its own data. That data just wasn’t as good, and users all over the world balked at the inaccuracies.

Don’t cut off your nose to spite your own face. Apple stopped using Google’s map data because they were angry about Android. I’m sure that’s oversimplified, but it’s the impression that Apple sent.

Apple’s first commercial computer, the Apple II, took the world by storm. Designed by Steve Wozniak, the Apple II took the company from a garage to an office park. Its successor, the Apple III was designed by committee and it showed. It was a total lemon. Its faults are too numerous to list here, but most infamously, it had microchips that came unseated from the motherboard. When users called tech support, Apple employees told them to drop their computers to reseat the chips.

Too many cooks spoil the pot. There’s nothing wrong with having a product designed by a team, but if the team doesn’t work well together, you may end up with a product that customers have to (literally) drop to repair.

The Apple Newton was a personal digital assistant (PDA) invented by John Sculley’s Apple in the early 1990s. It was Apple’s first attempt at a touch screen device, but it didn’t work all that well. The Newton’s main method of input was handwriting recognition. You wrote on the screen with a stylus, and it converted your handwriting into typed words. Only it was so laughably bad that no one could do anything with it. With time, it might have gotten better, but when Steve Jobs returned to Apple, he killed off Sculley’s tablet and started work on his own.

Styluses suck. So does handwriting recognition. Steve Jobs figured this out before anyone else. For years, there were a zillion Newton clones out there, all of them mediocre. It was only when Apple made a touchscreen for fingers that the idea took off.

The Power Mac G4 Cube was a small desktop computer than came in a gray 7-inch cube, suspended inside of a transparent enclosure. It had Steve Jobs and Jony Ive written all over it, the same guys behind all the modern iDevices. So what went wrong? The G4 Cube was overpriced and underpowered. The case was pretty, but it wouldn’t accept full-size upgrade cards. Like so many other Jobs-inspired products, it lacked a fan when it could really use one. As a display piece, the “iCube” was top notch, but as a working computer, it sucked.

Form follows function. Not the other way around. Apple’s known for making “pretty” devices, but their most successful products (like the iPhone and iPad) are built for function, then polished. If you build a pretty case and shove a computer inside, you’re bound to fail.

And One More Lesson

Even Steve Jobs fucked up. He was the most successful innovator of our age, and he succeeded so much because he wasn’t afraid to fail. Looking at this list of Apple’s biggest failures, I can tell you that this is a good lesson for all of us. It’s better to have tried and failed than to have never tried at all.