When In Doubt, Reboot 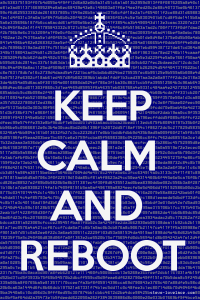 Some folks just “get” computers and some folks don’t. I’m not entirely sure why that’s the case. To some extent, it seems to be a function of age, but that’s far from universal. I know older people who understand computers intuitively, and younger people who view their iPhones as some sort of “magic box”. In any case, as someone who is technologically literate, I spend a lot of time helping out family, friends and coworkers. I’ve even helped total strangers at the coffee shop. To me, it’s pretty simply. When it doubt, reboot. If that doesn’t do the trick, Google is your friend.

It always helps to reboot your computer and google your problems, but tech smart people have another trick. It’s called “clicking on random things”, and is best illustrated by this XKCD flowchart. As dumb as it sounds, sometimes, trial and error can be a pretty good troubleshooting method. The key is to keep track of what random thing you clicked, so that if it screws things up worse, you can always unclick it.

The last thing to remember about computers is that there’s a big difference between hardware and software errors. Unless your screen is cracked or your hard drive is making unusual noises, it’s probably a problem with software. I still marvel at how many people think that computer viruses and malware can physically trash their machines. Recently, a small government agency physically destroyed $170,000 worth of computer hardware because they had a virus. They even destroyed things like mice and keyboards. I pity the few computer literate underlings at that agency who had to witness such a stupid waste of resources.

There are certainly cases where you’re going to need outside help. Even some of the geekiest people I know come face to face with impossible-to-solve problems. But when it comes to fixing computers, try rebooting, googling and clicking. And if all else fails, don’t throw the mouse out with the hard drive.