Redesign 101: The Flag of Ontario 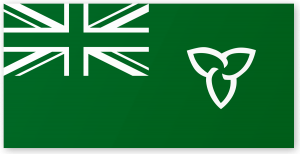 About half of the US States the same basic flag: plain designs that feature a seal or coat of arms on an otherwise plain blue banner. This makes it hard to tell apart the flags of states like Michigan, Vermont and Nebraska. In Canada, however, there are more unique designs. First, there is the Quebecois flag, the Fleurdelisé, an ancient design featuring four fleur-de-lis around a simple white cross. Then there’s the flag of Nova Scotia, which takes its cues directly from the Scottish flag, reversing the colors and adding the Scottish coat of arms. But not all the Canadian flags are as well-designed. The flag of Alberta consists of a simple shield on a blue background, just like its American neighbors, and the flags of Manitoba and Ontario are simple variations on the British Red Ensign. Today we’re going to take a look at the flag of Ontario. 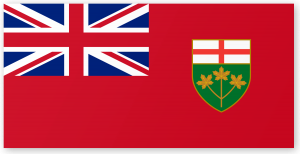 The British Empire used a complex series of flags to represent its colonies. These flags, known as ensigns, came primarily in red white and blue. As the empire grew, individual colonies started to “deface” their flags with a seal or coat of arms. Today there are still scores of flags based on this template. Australia and New Zealand both use a defaced Blue Ensign, while Fiji and the Royal Air Force use sky blue British Ensigns. For much of its history, Canada used a defaced Red Ensign. That all changed in the early 1960s.

In 1963, the Canadian Prime Minister called for the country to have its own unique flag. Thus began a great debate across the Dominion. After several good designs and many, many bad ones, parliament narrowly approved the Maple Leaf Flag that we know today.

The Maple Leaf flag was popular, but many Canadians still preferred the old Red Ensign. Soon the central provinces of Ontario and Manitoba created their own provincial flags, based strongly on the old design. Today the flags of these neighboring provinces are almost identical. Both are Red Ensigns with a simple shield, and both shields have a red and white Cross of St. George in the upper third of the field. The flag of Ontario has three maple leaves on the lower part of the shield, while Manitoba has a bison on the the range. That’s it. Just a few square inches (or since we’re talking about Canada, square centimeters) differentiate these two flags. Let’s look at how we can remedy this.

A New Flag of Ontario

Ontario’s official provincial flower, the trillium, has been used for years as a symbol of the Ontario government. It’s also been used on the Franco-Ontarian flag, a green and white banner that represents the French speakers in the province. With a stylized trillium and a simple summer=green / winter=white symbolism, this flag is the perfect inspiration for a new flag of Ontario. But I didn’t want to throw out the old flag entirely. There are still a lot of Ontarians who are loyal to the British Empire, so I decided to keep the Union Jack. Thus I started with a trillium-defaced Green Ensign. I liked the basic design, but the blue and red on the canton clashed with the green field of the flag. Remembering that the best designs are monochromatic, I simplified the Union Jack to a simple white design. The result is the flag featured at the top of the page. It is a distinctive design that still pays homage to the Empire. I think it would be an excellent new symbol for Ontario. What do you think?