Redesign 101: The Flag of New Zealand 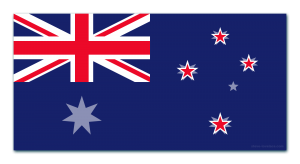 The Flag of New Zealand overlaid on the Flag of Australia. The only difference is in the number and presentation of the stars.

New Zealand needs a new flag. They’ve needed one for years, but the momentum has been growing under the current Prime Minister. The current flag of New Zealand is a colonial ensign that looks like a hundred others, most notably Australia. Recently, the NZ government held an online submission contest with varying results. In the end, they didn’t use any of the online submissions (not even the so-bad-it’s-good Laser Kiwi flag). Instead they whittled the field down to 40 professionally done designs. I don’t have time to go through all the designs here, but despite the variety, they all use a few basic symbols.

The most common design motif is the Silver Fern. This is already strongly associated with the New Zealand National Rugby Team, and has become a symbol of the country on par with Canada’s maple leaf. The odds of the new flag having a silver fern are very high, but there are a couple of other symbols under consideration.

First there is the Koru, which also represents a fern, albeit one that is not yet unfurled. It is a common symbol for the native Maori, though it is also associated with the country as a whole.

Then there is the Southern Cross. Representing the constellation Crux, and the Southern Hemisphere as a whole, it’s featured on many flags, including New Zealand, Australia, Brazil, Papua New Guinea and (Western) Samoa.

The Red Peak flag is a relatively new design. Instead of using traditional symbols like the Silver Fern or Southern Cross, the Red Leaf designs use an entirely new symbol, created to represent both English and Maori people.

As a former British Colony, New Zealand maintains close ties to the United Kingdom, and the Union Flag (or as we Yanks call it, the Union Jack) still has a fair amount of support, especially amongst older people. Only one of the 40 designs uses the UK flag, however, and even that design uses a stylized version made to look more Polynesian. 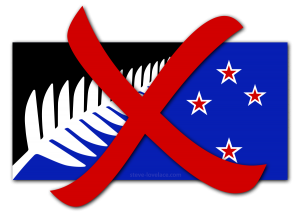 Unfortunately for flag geeks like myself, New Zealanders voted to keep the current flag. While I’m not a fan, I can’t blame them. The finalist flag (Option 5 of the original 40) really has that “design by committee” look to it. It has a Silver Fern and a red Southern Cross along a blue and black background. It’s not terrible, but it’s not great either. If anything it reminds me of some of my earlier designs, where I’m trying to fill every bit of available space. I still assert that a simple black flag with a white fern leaf would be the best design. That’s the one NZ Rugby fans are using anyway, so why not make it official? Supposedly the Silver Fern flag as is looks too much like the flag of ISIS. No joke. I was sorry to see that little bit of fear mongering bring down an otherwise awesome design.

What do you think of the Flag of New Zealand? Do you think it’s time for a replacement, or do you like the current design? Let me know your reasoning in the comment section.