Redesign 101: The Flag of Michigan 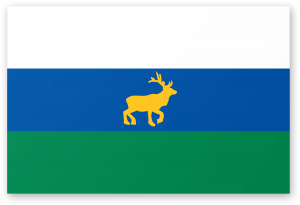 Today I’m starting a new series called “Redesign 101”, where I try into improve on the designs of common flags. As a graphics geek, I think that there are a lot of crappy flags out there. About half of US States have plain blue flags with coats of arms on them. These flags are hard to tell apart even for people familiar with them, so I thought I’d redesign them, starting with the state I grew up in. For the flag of Michigan, I draw inspiration from the geography of the state. Michigan is unique in that it consists of two separate landmasses, separated and defined by the Great Lakes. So I started with a Reflex Blue stripe across the middle of the flag, representing the Strait of Mackinac that cuts the state in half, as well as the Great Lakes as a whole. 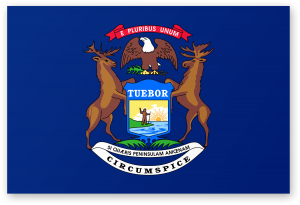 The Current Flag of Michigan

The top and bottom stripes of the flag represent the Upper and Lower Peninsulas, respectively. They also represent the white winters and green summers of the state.

Michigan has a complex coat of arms that includes a deer, a bear, an eagle, a man with a rifle waving while standing on a beach, and two Latin inscriptions. Rather than put the whole coat of arms on the flag, I’m drawing out one element: the deer. Deer are very common in Michigan, so it’s a great symbol to represent the state. And by making the deer yellow, we can include the colors of both the University of Michigan and Michigan State University.

So with this flag, Michigan would stand out amongst the fifty states. With fifty state flags to memorize, children all across America probably wouldn’t recognize it, but kids in Michigan would. This flag would be a source of pride in a state that could use a little boost.