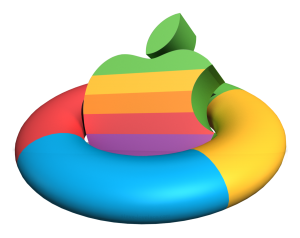 Coke versus Pepsi. Ford versus Chevy. Edison versus Tesla. There have been many great rivalries in the modern business world. One of the most iconic is Apple versus Microsoft. Steve Jobs and Bill Gates are two of the most famous entrepreneurs of our age. They come off as polar opposites: Jobs the hotheaded artist, Gates the calculated engineer. Apple traditionally attracts artists who view Microsoft fanboys as stodgy suits, while Microsoft attracts businessmen who view Apple fanboys as pretentious hipsters. But stereotypes aside, the relationship between Cupertino and Redmond is far more complicated. Jobs and Gates were more “frenemies” than true opponents, and nothing illustrates this better than the time Microsoft saved Apple.

The Return of Steve Jobs

In the mid-1990s, Apple Computer, Inc. was in rough shape. The new Mac operating system, code named Copland, was a mess. Their product line was convoluted and internal rivalries and bureaucracy were tearing the company apart. Things got so bad that there was talk of selling the company. Instead they went to their prodigal founder, Steve Jobs. Apple bought his company NeXT, ostensibly for the code of the NextStep operating system. But Jobs wasn’t going to sit quietly while Apple’s dysfunctional management screwed up his OS. Within a couple of months, he consolidated his power at Apple and purged the old management that brought him back. Soon he controlled the company as Interim CEO.

As soon as he started getting his hands dirty in the daily workings of Apple, Steve Jobs realized just how much trouble the company was in. It looked bad enough from the outside, but the internal affairs were even worse. Under the (lack of) leadership of CEOs Michael Spindler and Gil Amelio, Apple was dominated by turf wars and pet projects. Jobs ruthlessly cut people and products to stem the bleeding, but Apple was hard up for money. They needed outside investment. So Steve Jobs, a man not known for his humility, swallowed his pride and gave Bill Gates a call.

The relationship between Microsoft and Apple went back to the 1970s. Microsoft supplied Apple with an advanced version of the BASIC programming language, as well as an expansion card that made Apple II computers of the era compatible with CP/M machines. Microsoft also created software for the Macintosh before its release, something that “inspired” the company to develop Windows. But even after developing the Mac’s main competitor, Microsoft continued to develop software for Apple’s platform. Most notably, they made Microsoft Office applications like Word, Excel and PowerPoint. Steve Jobs realized that, if Gates and company ever discontinued Office for the Mac, Apple would be doomed to the Trash Can of History.

Perhaps Jobs could have turned somewhere else for an investment in Apple. But he knew how important Office applications were (and are). Even graphics nerds like myself need a word processor and spreadsheet. So Jobs and Gates struck a deal. Microsoft would buy $150 million of non-voting shares and keep Macintosh Office applications on par with their Windows counterparts. In exchange, Apple would make Internet Explorer the default web browser on the Mac for five years. Finally, in order to keep the Mac from becoming too “Windows-like”, Microsoft would spin its Mac programmers off into a semi-autonomous division, where they had freedom to make their applications more “Mac-like”.

Steve Jobs was famous for his keynote speeches, so much that they became known as “Stevenotes.” In later years, these took on an almost religious fervor, with Jobs as the prophet. But in 1997, Steve Jobs was not yet infallible in the eyes of Apple fanboys. When he announced that Internet Explorer would be the new default Macintosh browser, the audience started booing. Then came the kicker, something Steve Jobs would later come to regret. After announcing the partnership with Microsoft, Bill Gates appeared live via satellite on the projector screen, sending the audience into near-hysteria.

Beaming with pride over the big screen, Gates looked down upon an angry audience of Apple fans. Tech pundits of the time compared it to Big Brother’s face from Apple’s famous “1984” commercial. The event was so notorious that it became a focal plot point in the movie “Pirates of Silicon Valley.” To people at the time, it seemed like the end of Apple Computer as an independent entity. Bill Gates had definitively crushed Steve Jobs, and within a couple of years, Apple would go the way of the Amiga or the Atari ST. Of course, we know with hindsight that this was not the case.

Steve Jobs’ plan worked exactly as intended. Microsoft continued to make Mac programs, and thanks to the semi-autonomous Mac Business Unit, the programs were released to rave reviews. Meanwhile the infusion of cash allowed Apple time to develop the iMac, along with the new NextStep-based operating system, Mac OS X. Everything Apple did after that, the iPod, iPhone and iMac, rested on this foundation. Perhaps Apple would have survived without Microsoft, but they might have never become the behemoth they are today.

Do you think that Microsoft saved Apple with their investment? Do you know of a better way Steve Jobs could have kept the company afloat? Let me know your thoughts in the comment section.