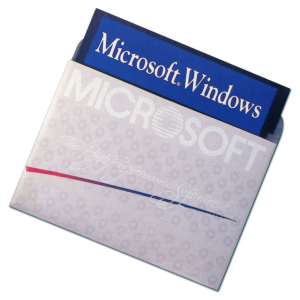 Microsoft Windows has been around for 30 years, and it’s still the dominant operating system for desktop PCs. Ever since the release of Windows 95, this venerable OS has dominated the desktop market, (especially in the workplace). But like many things in life, this didn’t happen overnight. The earliest versions of Microsoft Windows were pretty awful, though they got progressively better as time went on.

In the early 1980s, computers were mostly text-based. You would see a black screen with a command prompt, and then type in the name of the program you wanted to run. But that was about to change with the invention of graphical user interfaces (GUIs) like Xerox Star, VisiCalc’s Visi On and the Apple Lisa and Macintosh systems.

Microsoft could see where the future lay, so they started on their own system. Released in 1985, Windows 1.0 didn’t do much, even compared to the competition of the day. It lacked things we take for granted today, like clickable icons and overlapping windows. To run an application, you used a program called MS-DOS Executive to select an .EXE file from a list. If that .EXE file was a DOS application, it would dump you out of Windows and into the application until you quit. For the few Windows applications of the time, you could multitask your programs, but the apps tiled across the screen like window panes, so you couldn’t drag things to where you wanted them. Supposedly Microsoft did this to avoid legal problems from Apple, who had already sued Digital Research for using overlapping windows in its GEM operating environment.

Not only did Windows 1.0 have a clunky interface, it was also underpowered beneath the skin. In fact, it wasn’t really an operating system. Windows 1.0 was really just a program that ran on top of MS-DOS. This was partially to maintain backward compatibility, but there was a more important reason. Windows was only meant to be an interim solution. Microsoft and IBM were already working on a more advanced operating system called OS/2. IBM was still the dominant partner in this project, and Microsoft had to be careful not to rock the boat.

Microsoft Windows 2.0 debuted in 1987, with significant improvements. On its surface it looked like Windows 1.0, with the same ugly MS-DOS Executive. But Windows 2.0 wasn’t afraid to step on some toes. It copied more features from both Mac OS and OS/2. This version of Windows allowed you to overlap your windows as on a Macintosh, spurring the infamous “Look-and-Feel” lawsuit that would continue for a decade. Still, it was a long way from mirroring the functionality of the Macintosh OS. Windows wouldn’t get full drag-and-drop functionality until Windows 95.

The biggest improvements to Windows 2.0 were on the back end. There were two different versions: Windows 286 and Windows 386. The former worked much like Windows 1.0, basically adding a shiny interface to MS-DOS. Windows 386, on the other hand, was optimized for the new generation of 32-bit 386 processors. Running in 386 mode, Windows could run multiple DOS applications at once and access more memory than a typical DOS application. This took Windows one step closer to being a full-fledged operating system.

Next time, we’ll take a look Microsoft’s attempts to turn Windows into a full-fledged operating system with Windows 3.0, Windows 95, and most importantly, Windows NT. It was a long and rocky road to desktop domination.