The Lost Month of Mercedonius 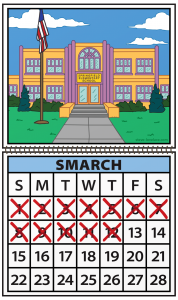 We take it for granted that there are twelve months in the year, but this has not always been the case. The Roman-derived calendar that we use today has had anywhere from ten to thirteen months. Let’s take a look at the history of that lost month: Mercedonius.

What is a month?

A month is a human creation, a method of trying to synchronize the phases of the Moon with the revolutions of the Earth. Since these events don’t naturally match up, calendar-makers have to choose whether to line their systems up with the sun (solar calendars) or the moon (lunar calendars). In addition, calendars were invented for the purposes of agriculture. By counting the moon cycles, early farmers could get a rough estimate of when to harvest their crops. Since the farmers didn’t plant crops in the winter, the calendar only needed to cover three-quarters of the year.

From ten months to thirteen

Back in the earliest days of Rome, when the eternal city was still a small kingdom, the 304-day lunar calendar ran from March to December. (We can still see this in the etymology of September, October, November and December, whose names are derived from the Latin numbers for seven, eight, nine and ten.) As Rome grew in power, the Romans realized they needed a calendar that covered the whole year. So they added two months: January and February. This calendar, a solar calendar, covered the winter months, but with 355 days, it still wasn’t very accurate. Hence a thirteenth month was invented.

Every couple of years, the Romans would insert the month of Mercedonius between February and March. Generally, they would lop the last few days off of February and insert a 27- or 28-day Mercedonius, bringing the year to 377 days. But this wasn’t the squirreliest part of the ancient Roman calendar. Unlike modern calendars, the placement of leap years was rather arbitrary.

Today our leap years are determined by a simple algorithm. Years divisible by four have an extra day (except on the first year of every century not divisible by 400.) This is as accurate as we need to get for just about every application but astronomy. With our modern Gregorian calendar, you can figure out what day of the week July 4, 2776 will fall on. (It’s a Sunday). But this type of regularity wasn’t true in pre-Imperial Rome. Instead the calendar was adjusted regularly by the high priest of Rome, the Pontifex Maximus.

The position of Pontifex Maximus still exists today, amongst the titles of the Pope. But in the days of the Roman Republic, the Pontiff was a political office as well as a religious one. This meant that the ruling Pontiff could add in leap years to extend his term in office, or withhold a needed leap year to shorten his successor’s term. This problem got worse as the Republic crumbled. In 46 BC, Julius Caesar used his position as Pontiff to reform the calendar. He made the year 365 days, with an extra day every four years. This Julian Calendar was accurate enough to last for over 1,500 years without further meddling.

Today we use the Gregorian calendar, which is basically the Julian calendar with a few special exceptions (the aforementioned part about skipping a leap day on the first year of every century not divisible by 400.) But in a way, we still have Mercedonius. Now it’s just a single day, stuck at the end of February every four years. This vestigial Mercedonius is often overlooked, but next time your calendar says February 29, take a moment to remember the month that once was, and the enormous amount of trial and error that went into inventing an accurate calendar.