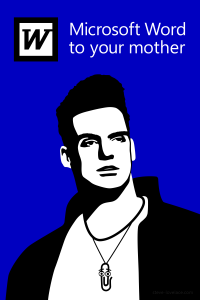 I want a version of Microsoft Word that allows you to “stop, collaborate and listen”.

As a writer, I spend a lot of time using a word processor, specifically Microsoft Word. For the most part, word processing software hasn’t changed much since the early days of Windows. In some ways that makes sense. Word processors don’t use fancy graphics or multimedia features. But I do think there’s room for improvement. In fact, I think a lot of the stagnation has to do with Microsoft’s dominance. Once Microsoft Word took over the market, they lost the need to innovate, just like they did with Internet Explorer 6. And while the rise of online word processors like Google Apps has put a dent in Microsoft’s monopoly, we still have a long way to go. Here are some features I would like to see in a 21st century word processor.

When I need to create a flyer or brochure for work, I usually go straight to Adobe InDesign. Adobe applications let me lay out a page exactly as I’d like it. They also make it easy to use advanced typography features like kerning, tracking and semi-bold fonts. The problem is, when I make documents in InDesign, my coworkers can’t edit them. So if I want to make a newsletter template for my boss to fill out, I have to do it in Word. Microsoft Word is easier to use for beginners, but makes life hell for advanced users. It’s constantly rearranging my templates, and won’t let me use many advanced font features. I’d like a word processor that makes it easy for a designer to create a layout and send it to non-designer colleagues for editing.

We had WordPerfect for Windows on my old 386 machine. Even back then, it came with spell check and grammar check. In the 25 years since, spelling and grammar checkers haven’t gotten much better. I know that English is not the most logical language, but my grammar checker still confuses “its” and “it’s” sometimes. Given how powerful modern machines are, I think we could do better. And while we’re on the subject of spell check, I would like a simple toggle button to turn it off and on. A lot of times, on my first draft, I’d rather not be bothered. Those little red and green underlines distract me from my stream of consciousness. So I go into the Settings panel and turn it off, only to forget to turn it back on before submission. A simple toggle switch would help me with this.

Version control is a surprisingly complex subject with a number of solutions. With multiple people making multiple edits, it can be tough to keep track of the most current canonical copy. Software developers use programs like Git to keep track of versions, though I hear that dealing with Git brings its own headaches. Meanwhile I still know a lot of people who think of files as physical objects, asking me to email a file when it’s already on a shared server. This is a user-centered problem, and I don’t have a good solution to it. If I did, I could probably make a fortune.

This is an oldie but a goodie. Back in the day, WordPerfect had a feature called “Reveal Codes”. This would open a pane at the bottom of the screen that showed the formatting codes for things like italics and indents. It was very useful, but Microsoft Word never adopted it. This is a feature that allows you to see paragraph marks, but you still can’t directly edit the XML code the document uses for formatting. In the WordPress software I use for this blog, on the other hand, I can click over into HTML mode at any time. Even though I’m not a coder, I find it useful for formatting glitches, like when there’s a rogue <em> italic code messing up my typing.