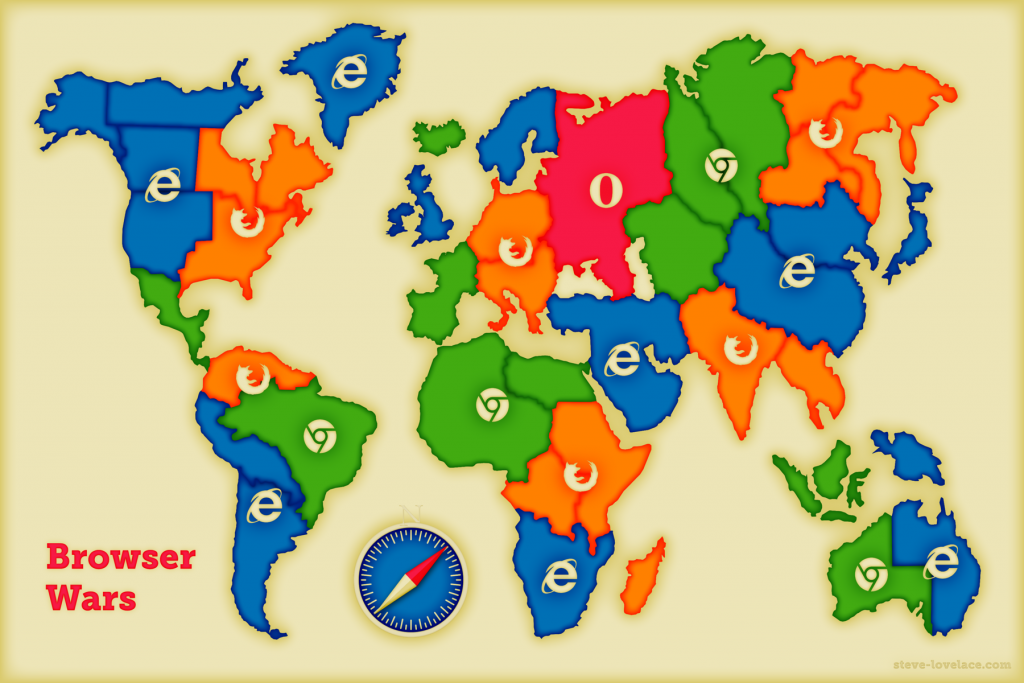 In the 1990s, Netscape Navigator and Microsoft Internet Explorer competed for domination in the so-called “First Browser War”. It took a couple of years, but Microsoft won a complete victory, and by 2002 Internet Explorer was on over 95% of computer desktops. However, this didn’t last long. Before imploding, Netscape spun off some of its assets into a nonprofit known as the Mozilla Foundation. Meanwhile Internet Explorer languished, getting only minor patches and bug fixes. This gave Mozilla a chance to break into the market with a new browser called Firefox, kicking off the Second Browser War.

The Rise of Internet Explorer

Internet Explorer won the First Browser War through a combination of monopolistic practices and technical superiority. The former is well-known, but the latter is almost inconceivable nowadays. In its later days, Internet Explorer was a buggy mess of legacy code, but the early versions of IE ran faster and leaner than Netscape Navigator. Part of this was a difference in the business model.

Netscape sold a software package that costs $30. To give people their money’s worth, they kept adding features, like an email client, a newsgroup reader and an HTML editor. By comparison, Internet Explorer was just a browser, separated from an email reader or web design software. As Netscape’s browser grew bigger and more complicated, it became a no-brainer just to use the free and lean Internet Explorer. It was already built into Microsoft Windows, so people weren’t going to go out of their way to install an inferior product. And thanks to a deal with Apple, Microsoft also made a Mac version of Internet Explorer, leading to its dominance on that platform as well.

There’s a reason why monopolies are illegal. Without competition, companies have no incentive to innovate. This is exactly what happened with Microsoft in the early 2000s. Having won the First Browser War, they sat on their laurels. It’s as if they believed what they told the Justice Department in its case against Microsoft’s monopoly. There they had argued that the browser was just another component of the operating system. With this in mind, they decided to sync browser versions and Windows versions. The idea was that Internet Explorer 6 would be bundled with Windows XP, with only minor bug fixes till the next version.

Two things happened that changed Microsoft’s plan, however. First off, Windows XP refused to die. Its successor experienced a series of delays. When it finally arrived, it didn’t live up to the hype. Second, a new browser arose from the ashes of Netscape. Before merging with AOL, Netscape had spun off an open source project into a new nonprofit venture called the Mozilla Foundation. Mozilla took a few years to get a usable product, but soon they had resurrected the remnants of Netscape. Likening it to a Phoenix, they wanted to call it Firebird, but unable to copyright the name, they went instead with Firefox.

Mozilla Firefox made a dent in Microsoft’s armor. By 2004, Internet Explorer was old and insecure. Firefox started making inroads, starting with geeks like me. Once they showed that there was indeed a market for browsers, Google got involved.

Inspired by Firefox, Google put the nuts of bolts of their browser into an open source project called Chromium. This in turn powered their proprietary browser, Chrome. While early versions of Firefox were grew out of the old Netscape browser, Chrome was a whole new animal. It was much more minimalist, reducing the browser a couple of buttons and clearing up the rest of the page for the actual webpages. They even combined the URL bar and the search bar, since Google’s main aim was to get people using their search engine.

Chrome quickly rose to the top of the browser market, stealing market share from both Firefox and Internet Explorer. There it remains to this day, with Firefox coming in second and Microsoft coming in a distant third. By the time Windows 10 came around in 2015, Internet Explorer was doing so badly that Microsoft replaced it. Nowadays, Windows comes bundled with the Edge browser. With a different underlying engine and a simplified interface, it’s Redmond’s answer to Chrome. It hasn’t been a roaring success though. It’s better than Internet Explorer, but it’s still just the browser that comes standard with Windows, like the default ringtone on your phone.

There have been other browsers on the market. Most notable are Apple Safari, which comes bundled with Macs and iOS devices, and the independent browser Opera, which has held a small, but loyal userbase for years. But their contributions are minor compared to Chrome and Firefox. When it comes to the browser wars, Google is the new monopoly. Whether or not the Second Browser War will lead to a third has yet to be seen.