Can I Be a Nerdfighter? 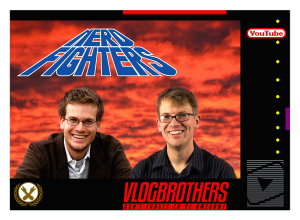 It started with SciShow. While watching chemistry videos on YouTube, I stumbled across Hank Green’s series of short, concise science videos. From there, YouTube’s Related Links led me to Crash Course World History with Hank’s brother, John Green. I was hooked, and after binging through the Crash Course videos, I moved on to Hank and John Green’s original YouTube channel, Vlogbrothers. Soon I was counting myself as a fan, a Nerdfighter as they are called. But I’m not the typical fan, and that might be a problem.

The problem is that, as much as I like Vlogbrothers videos, no one else in my social group seems to share my enthusiasm. I’ve shared their videos a number of times online, and none of my peers seem interested. That makes sense if you look at the demographics. A large number of people in the Nerdfighter community are teenage girls. (This makes sense since John Green is a well-known Young Adult author.) I am a 35-year-old man, and I don’t want to hang out with teenage girls. Not just because it’s creepy, but because, other than the love for the Green Brothers’ many endeavors, I don’t have much in common with teenage girls.

To me, half the fun of being a fan of something is discussing your shared interests with fellow fans. But try as I might, no one I know seems interested in watching John Green play a soccer video game with two players named after himself. Granted, it’s a pretty weird concept. but you’d think I’d be able to find a few other people my age who appreciate it. In the end, I could consider myself a fan of the Green Brothers’ work, but I’m not really part of the Nerdfighter community. That’s okay too. I have plenty of other interests that I do share with my peers. I can still watch the Vlogbrothers videos and enjoy that such a community exists, even if I’ll never really be part of it.

Have you watched any of the Green Brothers’ videos? If so, do you consider yourself to be a Nerdfighter? Let me know in the comment section.