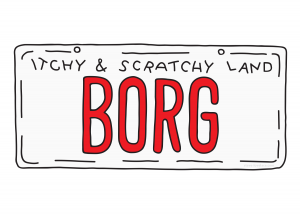 The greatest enemy on Star Trek: The Next Generation is the Borg. For those of you who aren’t into Star Trek, the Borg are a hive mind made up of species from around the galaxy. They are one of the scariest enemies in the Star Trek universe, a race of mind-destroying space zombies. But sometimes I wonder if being part of a hive mind would be such a bad thing.

A Fate Worse Than Death

The Borg travel around in cube-shaped starships, assimilating every sentient race they find. Using cybernetic implants, the Borg wipe their captives’ minds and connect them to the collective. Once connected, an individual becomes little more than a nameless drone. It’s a scary proposition — a fate worse than death. (Literally. After Captain Jean-Luc Picard is temporarily assimilated, he makes it a policy to kill any crew member in the process of being assimilated, out of mercy.) But while the Borg on Star Trek are portrayed as mindless space zombies, I don’t think the idea has to be as terrible as it’s portrayed on the show. This got me to thinking, what if there was a Benevolent Borg collective?

The idea isn’t as crazy as it first sounds. We like being constantly connected to others. Look at how much people are glued to their phones nowadays. Look at how often they check their Facebook and other social media. While I wouldn’t want to be a member of the Borg collective as portrayed on Star Trek, I think there is a middle ground that might be nice. I could see a benevolent use of Borg technology, such as being able to “telepathically” communicate via wireless signal. Or having access to Wikipedia without having to look at a screen. That said, I wouldn’t be the first to volunteer, or even the second. I think that beneficial cybernetic implants will take decades to perfect. So while I sometimes think it would be nice to be cybernetically connected to my loved ones, for the moment, I’m fine with sending a text message.