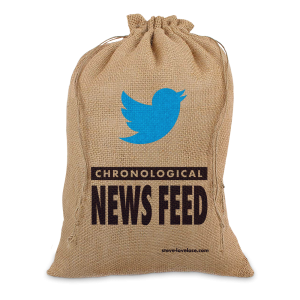 One complaint I read over and over again about social media sites is that they no longer have a chronological news feed. Back when Facebook introduced its news feed, it showed the latest update from your friends. As the name implies, it was feeding you news. Twitter too was built on this, as was Instagram (now owned by Facebook.) Twitter is still roughly chronological, but you still have to deal with a bunch of settings to get it. Facebook, meanwhile, is a complete mess. Sometimes it shows you the same thing over and over. Other times you can’t find a post you just saw a few minutes before. What gives?

“You are the product”

There’s an adage floating around online whenever people complain about Facebook: “If you are not paying for it, you’re not the customer; you’re the product being sold.” Like most such statements, it’s an oversimplification, but there is a truth to it. Facebook’s news feed is not organized for your convenience. It’s organized to increase the visibility of paying advertisers. Facebook is always methodically testing out how people engage with the site, and they’ve found that putting posts out of order increases engagement. That might me because it takes longer to find something you’re looking for, but annoying or not, it keeps people on the site longer, and so the chronological news feed goes the way the the Dodo.

Why Does It Work?

There are a lot of advantages (for Facebook) to keeping the news feed non-chronological. With a strict chronological feed, you only need to scroll down so far until you find posts you’ve already seen. This introduces a natural “end” to your social media check, the last thing advertisers want. And with a chronological news feed, you generally only see the same post once, maybe twice. With the opaque algorithms they use instead, you might see the same post half a dozen times. And you might not see some posts at all. The non-chronological feed makes it damn near impossible to tell. Like casinos without clocks or windows, the business model is to keep your attention focused.

Sadly, I don’t see any improvement in this area. The chronological news feed is dead. Long live the algorithm. As long as we continue to use proprietary social media sites, like Facebook, Twitter and Instagram, we’re going to have to deal with manipulated news feeds. Perhaps, maybe, one day we’ll have some kind of open standards for social media, and we can customize news feeds to our liking. But I’m not optimistic. Overall, this just seems to be one of the (many) downsides of social media.

What do you think about the decline of the chronological news feed? Let me know your thoughts in the comment section.