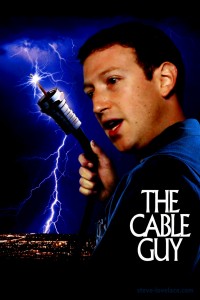 Mark Zuckerberg seems to think that people like Facebook. Why wouldn’t he? The social networking site claims over a billion users. Everybody seems to have an account nowadays, but just because it’s popular doesn’t mean it’s well-liked. In fact, it’s almost universally despised, like the high school cheerleader who the other girls begrudgingly follow. Or to use a more technological analogy, Facebook is like the cable company. People like cable TV, but they hate the utility. They love the choice of channels, buy they dread having to call tech support and wait for the cable guy to show up. It’s the same with social networking. People love social networking, but they can’t stand Facebook.

Mark Zuckerberg and the sycophants that surround him don’t seem to notice this disdain. They look at the numbers and think “people like us”. But in this case, then numbers lie. People don’t like Comcast; they like “Game of Thrones”. They put up with Comcast to watch their favorite shows. Likewise, I put up with Facebook (the company) because I enjoy Facebook (the communications tool).

So far there is no successor to Facebook. Twitter is popular with techies and teens, and Google Plus is supposedly a hopping place for certain groups of people, but at the moment, there’s no one big threat to Facebook’s hegemony. I think that the real challenge will come with the networking of social networks. Right now, each social network is a little walked garden. But as time goes on, these services will grow more interdependent. When that happens, people will migrate to smaller services.

I see a day when I could be on Google Plus and you could be on Twitter, but we could transparently stay in touch across the services. It’s just like email. I can use Gmail and email someone on Yahoo or Hotmail or even AOL. And just as there are still millions of people with AOL email accounts, there will be millions of people on Facebook. But I look forward to a day when I can communicate with my friends without it. I look forward to Facebook being just another utility.