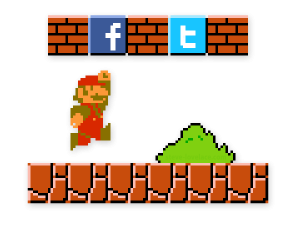 If there’s such a thing as “Generation Z”, the Z must stand for “Zuckerberg”. Like it or not, we live in the Facebook era. As of September 2011, the social networking service is up to 750,000,000 users. And while the rate of growth has slowed down a bit, it might still top a billion active users. For a child of the 1980s like me, that means that Facebook is an integral part of my social life. As such, there are all kinds of Facebook oddities that complicate our modern lives.

Sometimes on Facebook, I get what I call “protofriends”. I’ll open up my Facebook and it’ll say something like “Alice Smith is now friends with Bob Johnson and 9 other people”. Whenever I see that, I know that there’s a pretty good chance I’ll be meeting Alice in the near future.  Not only that, but when I meet her, I’ll know that she’s been vetted by our nine mutual friends. And while the standards for Facebook friendship aren’t all that high, it’s better than nothing.

The downside of this scenario is knowing too much about someone you’ve just met. Suppose I got to a party and recognize Alice from her photos. Before I even meet her, I know that she likes to drink White Russians and go rock climbing. I know all of this without actually Facebook-stalking her; instead I just gleam it from her dialogues with my existing friends. But if I mention any of it, I risk coming off as a Grade A cybercreep. Maybe some guys could pull that off as an icebreaker, but not me.

“Kevin Bacon is a mutual friend”

Then there’s the opposite of the protofriend experience, when you meet someone for the first time and find that you have Facebook friends in common. That’s always fun, and I wish I had a catchy name for it. You would think that, living in a city of four million people, this would be a rarity, but it happens far more often that you would expect. Like the Birthday Paradox, there’s probably a logical, mathematical explanation for such coincidence, but even if there is, it still “feels” weird.

Other Facebook oddities abound, like when two of your long-time friends finally befriend each other. It always amazes me when I’ve known Charlie for three years and Alice for two, but somehow they’ve never met each other. And while I’m sure this kind of thing happened before Facebook, it’s still interesting to see it spelled out so clearly on a computer screen.

Finally, there are the people who don’t use Facebook at all. (You know who you are.) For people of my generation, Facebook is almost a necessity. My parents and their peers treat Facebook as a luxury. They use it mostly for playing FarmVille, posting funny stuff from the internet, and catching up with old friends. You know, the reason the damn thing was invented in the first place. However, for a single thirty-something professional like me, Facebook has become a vital communication tool. While I certainly spend a great deal of time posting random stuff from the internet, I also use it to plan my weekends.

I met most of my friends in Dallas through Meetup.com. Meetups are a good place to make new friends, but if you want to keep up those friendships, Facebook is where it’s at. The best feature, in my opinion, is the Events application. You can use it for everything from an overnight camping trip to an impromptu happy hour. After (or during) the event, you can look at pictures on Facebook and talk about the times you had together. Then, over the course of the following week, you can start talking about what you want to do the following weekend. If I killed my Facebook, I would lose out on all of this. And while I’m certain that people would still contact me via phone or email, they would have to go out of their way to get a hold of me, and I would probably lose out on those impromptu happy hours.

The Essence of Friendship

Despite all the different ways to communicate nowadays, the essence of friendship remains the same. Facebook won’t change what it’s like to be human, nor will any other technology in the foreseeable future. Facebook doesn’t change the number of good friends we have, and it doesn’t change the dynamic between people. What Facebook changes is how we find our friends. We can now find people who share our interests, not just people who live nearby. And as someone who falls on the edge of the bell curve, this is a damn good thing. I’ll accept these Facebook oddities to make better friends in real life.