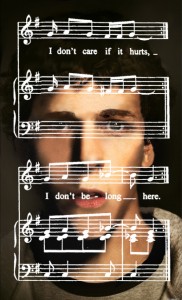 Facebook users always seem to oppose changes to the service. But when it comes to the new Facebook Ticker, people seem more upset than usual. Looking like a “Facebook-in-a-Facebook”, the Ticker sits on the top right of the screen and constantly updates with everything you do online. Notice that I said “everything you do online”, not just on Facebook, but anywhere. That’s the idea, anyway. With Facebook Open Graph, music apps like Spotify can mention every song you listen to. Every single song. Privacy issues aside, if everything you do online is posted to the Ticker feed, how useful is it?

Information is like sound; too much of it is just noise. The information in the Ticker is different from the information on Twitter, Google Plus or the Facebook News Feed. The Ticker automatically regurgitates information, like some kind of debugging console. Because people don’t choose what to share in this feed, the useless information far outweighs anything interesting, like a jackhammer drowning out a symphony.

Of course, when it comes to Facebook, you have to follow the money. Facebook’s bread and butter comes from the demographic information it mines from the users. If Spotify tells Facebook that you listen to Vampire Weekend twenty times a day, Facebook can serve you ads for similar bands. While this is useful information to marketers, it’s only relevant when aggregated. Each Ticker posting by itself is like a single music note. It’s only when you combine it with harmonious notes that you get a melody. But when you present it in a real-time chronological order, it’s just random noise.

The Facebook Ticker is neither relevant nor organized. I’d suggest they remove the automatic postings and aggregate the data, but the result would be the same as the regular News Feed. And while there are certainly privacy issues that Facebook should address, the worst part about the Ticker is its complete uselessness and clutter. Facebook with the News Feed and the Ticker is like a radio tuned to two different stations: mostly just static and noise.

What do you think of the Facebook Ticker? Let me know in the comments.