Poverty: the Greatest Threat to Our Republic 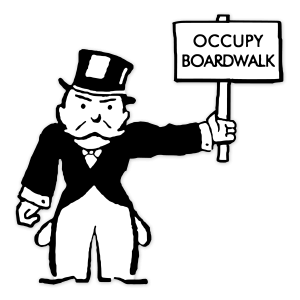 Poverty in America is worse than ever. A recent report from the Census Bureau shows that the number of Americans below the poverty line is at an all-time high. And with the threat of a double dip recession, it’s not going to get better any time soon. In fact, it might just get a lot worse.

Haves vs. Have Nots

Lately there’s been a lot of talk about cutting back on social services that benefit the poor, like Social Security and Medicare. Many politicians claim such programs are a waste of tax dollars. However, the people decrying such “Socialist” programs forget that these programs didn’t just spring into existence. Instead, they were created to diffuse tensions between the “haves” and the “have nots”. Poor people tend to get angry about their situation in life, so we created programs to help them. We did this not out of charity, but out of necessity. If our republic is to remain stable and democratic, we have to have a healthy and happy population. Otherwise, we are asking for violence and tyranny.

The United States government first addressed poverty during the Great Depression. Back then, the triumph of Capitalism over Communism was far from assured. Indeed, while the Western World languished, the Soviet Union was thriving under Josef Stalin’s five-year plans. Stalin and the other Bolsheviks wanted to spread Communism across the planet, and the United States was a prime target. But it wasn’t just the threat of an up-and-coming Russia that was threatening stability in America. There was also a lot of internal strife.

In 1932, thousands of World War I veterans descended upon Washington. They demanded the bonuses the government had promised them. The protest turned violent, and the military came in to put down the rebellion. It was the one of the closest times this country had ever come to a violent overthrow of the republic. Herbert Hoover’s government refused the Bonus Marchers’ demands, but the incident undoubtedly had an effect on the New Deal a couple of years later. President Franklin Delano Roosevelt and other leaders of the era realized that squalid living conditions were a sure ticket to open rebellion.

A generation later, the nation was in turmoil again, plagued by racial strife, an unpopular war and the aftermath of a president’s premature death. Protests were common, and while animosity towards the Soviet Union made it less likely that the US would turn overtly Communist, there was an even greater threat of internal rebellion. To combat this growing danger, President Lyndon B. Johnson came up with the Great Society initiative, with the goal of curbing poverty in America. Many of the “Big Government” programs of today date back to that era. As with the New Deal programs, these were not created out of sheer altruism; they were created to placate a restless population. President Johnson, like other great leaders, realized that people who are happy with their lives are much less likely to overthrow the government.

In the 21st century, with Communism disgraced and large protests a rarity, it seems like our constitution is in much less danger. Not so. Our modern economy stands on a precarious foundation of corn and oil. Take one of these away, and society crumbles. In his latest novel, The Profession, Steven Pressfield shows us a near future where a disgraced Marine Corps general conquers the Middle East. He uses a mercenary army, then promises cheap oil to the U.S. in exchange for subverting the constitution. While this is a work of fiction, it is also a strong warning about the state of our union. Pressfield’s book illustrates how economic shortages, combined with the unchecked power of the Military Industrial Complex, could subvert our democracy within a generation.

Benjamin Franklin once said that “They who can give up essential liberty to obtain a little temporary safety, deserve neither liberty nor safety”. Basic psychology tells us otherwise. In 1943, Abraham Maslow unveiled the concept of a “hierarchy of needs”, where basic survival instincts trump higher brain functions. The truth is, people will always worry about their safety and security over liberty and justice. Given the choice between starving in a democracy and thriving in a tyranny, most people will choose the latter. The basic survival instinct to take care of ourselves and our families is just too strong.

If America is to remain a great nation, we have to take care of our citizens. Any democracy that neglects its most needy will not be a democracy for long. With care and foresight, we can preserve our republic for future generations, remaining a shining exemplar of both freedom and compassion.