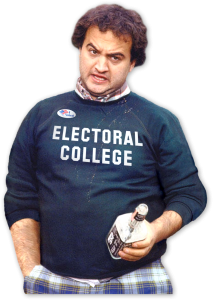 The 2012 Presidential Campaign broke just about every fundraising record out there. Thanks to the Supreme Court’s “Citizens United” ruling, candidates at every level of government were able to raise unprecedented mounds of cash. On the presidential level, most of this money went to advertising campaigns in swing states like Ohio and Florida. It seems like a monumental waste of money, bit without a constitutional amendment, we’re stuck with it. But that doesn’t mean we can’t improve things a bit. The 2012 election got me to thinking, what if we used campaign funds for philanthropy?

Political candidates talk about improving the world we live in, but hardly any of them seem to put their money where their mouths are. What if, instead of blowing millions on attack ads, candidates used their campaign funds to build new homes for hurricane victims? Instead of scrubbing pans in soup kitchens (or pretending to), they could hand them a large foamboard check? (Direct deposit would be even better, but I’ve worked in philanthropy long enough to understand the value of a good check presentation.) This kind of thing would do a lot more good in the utilitarian sense.

Drawing Attention to the Money

Unfortunately, there are barriers to this sort of campaign philanthropy. American politicians like to look like average Joes even when they’re not. Bill Clinton stressed his hillbilly childhood even though he was a Rhodes Scholar. Obama talks about being the mixed-race son of an immigrant goat herder, even though he was president of the Harvard Law Review. And as for George W. Bush, he stressed his Texan cowboy persona even though he comes from one of the America’s foremost political dynasties. Standing up with an oversized check would draw even more attention to the money in politics, and no candidate wants to remind the public of just how much money they’ve raised.

Then again, if you already look like a heartless plutocrat, campaign philanthropy might just be the thing. I’m speaking, of course, of Mitt Romney. Thanks to his comment about 47% of Americans belong moochers, he turned off a lot poorer Americans and cemented his image as a bland Scrooge McDuck. President Obama’s handling of Hurricane Sandy didn’t help Romney either. But imagine if, a week before the election, Romney had donated all of his campaign chest to hurricane relief efforts. Or better yet, if he had made a large donation months before to a program that helps people get jobs? Maybe then he could have truly been a “job creator“.