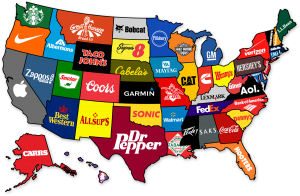 The Corporate States of America

Have you ever read Dune? Set 20,000 years in the future, it tells of a universe controlled by a hodgepodge of corporate and feudal interests. There’s an emperor balanced against a council of noble families. Then there are powerful interests that control trade, interstellar travel and religious mysticism. The interplay between these factions makes for a damn good story, but it also foreshadows a real-life future of corporate feudalism. Here in the early 21st century, we are witnessing the end of the nation state and the rise of corporations that control the world’s resources like feudal lords.

Feudalism developed in the Middle Ages when communication and transportation were both scarce and unreliable. Kings had little control over the day-to-day affairs of the kingdoms, and most of the power was held by the lords and barons. Borders as we know them did not exist. Instead there was property and allegiances. For example, the Duke of Normandy, William the Conqueror, was a vassal of the King of France. Then he conquered England and became a king in his own right. But he still owed allegiance to the French crown, as did all of the kings of England for generations after. Today we think of France and England as being two separate countries, separated by the English Channel. But that concept is fairly modern. For a good chunk of history, things were a lot more complicated.

The Rise and Fall of Nation States

Advances in technology allowed nation states to form. After the bloody battles of the Thirty Years War and the Peace of Westphalia, borders became much more rigid. With printing presses and railroads, kings and presidents could control large homogenized swaths of land. Printing allowed for a common language and religion. Improved travel allowed for strong political and military control across the land. And as time progressed, this idea spread across the face of the earth. European nation states divvied up the world into colonies. Then those colonies became nation states of their own. To this day, people still think in terms of nations and borders, but the times are changing.

The same technological advances that built the nation state are now leading its demise. The telephone allows companies to have employees and suppliers anywhere in the world. Container shipping allows us to produce goods in the cheapest places possible. Air travel, internet and television allow people across the earth to have the same cultural backgrounds, the same points of reference. This means that a company can incorporate in Delaware, design goods in California, produce them in China, ship them on a Norwegian ship registered in Liberia, and sell them all over the world. Tech support can be based out of India, and the executives making the money can keep their money in Switzerland and the Cayman Islands. This kind of thing happens everyday, and the ramifications are just beginning to be felt. Ultimately, this will lead to the return of feudalism.

In the United States, health care is provided by your employer, not by the federal government. And since Obamacare, this concept has become enshrined in law. I think that, as the power of multinational corporations grows, you will find a weakening of nation states. Citizens will owe their health and safety to their employers and their landlords than to a centralized government. There will still be government, of course, but its role will diminish. Corporate oligarchy will be the new norm, and I’m not sure if we can stop it. Instead we just need to make sure that this new system functions as freely and democratically as possible. We may not be able to stop the rise of feudalism, but we can try to make sure our future is not as bloody and dramatic as the world of Dune.

What do you think? Do you think we’re on the road to corporate feudalism. And if so, what should we do about it?