Boston, We Have a Problem 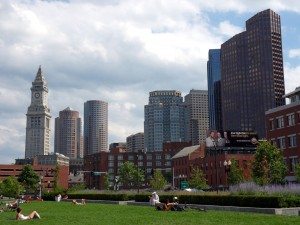 Car problems can make a mess out of any vacation. It started when I arrived at Logan Airport. I got off the plane and called my mom. She was just coming off the bridge. Outside I looked for a red Subaru station wagon with green Vermont plates.

I spotted my mom and waved. She pulled over, got out and gave me a hug. We loaded my luggage into the back, and a minute later, we were on our way. We weren’t going far. My dad, who had to stay back in Vermont, had pre-purchased 3 days of off-site parking. The plan was simple: park outside the airport, take the “T” into town, and enjoy our vacation without having to navigate the narrow, winding streets of Boston, Massachusetts.

My mom handed me the sheet with the information on it and I plugged it into the GPS. Two exits later, we got off the freeway. We drove around for a couple of blocks. I was looking for the parking place, but the neighborhood seemed too dense. A block later we were back at the freeway. The GPS told us to turn again, and soon we were going in a loop. On the third time around the block, I noticed a detour sign. The Chelsea Bridge was out, and our destination was directly across the river. I found the bridge on the GPS screen and looked for the nearest crossing. It was several miles out of the way, and traffic was stop-and-go all the way.

Meanwhile the car was making all kinds of unholy sounds. It was making an awful clunking noise, but we were stuck in a narrow road packed with rush hour traffic. There was nowhere to pull over. We just wanted to find the parking place and give the car a rest.

The road veered away from the river, and even with the GPS, we somehow missed the only left turn for miles in either direction. The road had a hard barrier in the middle, and there was no place to U-turn. Soon we were a good six or seven miles out of our way.

Finally, we found ourselves in a little blue collar suburb called Revere. Now we were in an actual town with cross streets and left-turn lanes. Good thing, too. The car was sputtering, in addition to the thunking sound it had been making. We got into the left-turn lane and the car stalled.

My mom tried several times to start it, all to no avail. Now there was a line of cars behind us. Without further thought, I jumped out and started pushing. It did want to budge, but then the guy in the car behind us got out and started helping. Then, two more guys appearing, seemingly out of nowhere, and the car started rolling. With my mom steering, we pushed it into the parking lot of a corner liquor store and into a proper parking space.

Using the GPS, I found an automotive shop a block over. We walked down the street only to find it out of business. Across the street was a small grocery store with a host of multi-ethnic signs in the window. We bought some oil and some coolant and took it back to the car. Neither helped. We were out-of-staters with car problems. It was a bad situation, but my mom had a great idea. She called the parking place and told then our sob story. It was a long shot, but as the guy’s customers, we had a human connection, however tenuous.

As it turned out, the guy who ran the parking place had a cousin who was a mechanic. He gave us Cousin Med’s number and my mom gave him a call. We told him where we were and he said he’d head on over.

Meanwhile we had attracted a bit of attention from people coming out of the liquor store, and thankfully it was the good kind. First, we had an ex-marine came over to help us. He was about fifty, with tattooed arms and a strong Boston accent. He fiddled around with the engine while I tried to start it, but we had no luck.

After that, three Hispanic guys came over to help. My mom told them that I spoke Spanish. I was in no mood to practice my foreign language skills, but I talked to one of the guys for a few minutes. His name was José and he was a local truck driver. He and his friends had emigrated from El Salvador twenty years earlier. José saw my mom’s Vermont plates and said that he made deliveries in Brattleboro every couple of months. He complimented me on my Spanish skills, and I thanked him for his help.

Getting to the Shop

The Salvadorians were still looking at the car when Med showed up. He was driving his brother’s Camry and didn’t have any jumper cables. Thankfully, José did, and together, they were able to start the car.

My mom offered José a twenty, but he refused to take it. She offered him a hug, and he obliged. Then he and his friends left and we followed Med to his shop. The car still drove like hell, and I was amazed we made it in one piece. And in fact, the car stalled out again right in front of his shop.

By now it was late. I had no idea where we were, and I certainly had no idea to get where we were going to get to our hotel. I looked for a bus stop to see of I could get us there on our own, but Med offered us a ride instead.

Med was nice enough to drive us into the city and drop us off at our hotel. Two days later, we took the T out to Wood Island Station and picked up the car for the long drive to Vermont. Despite the car problems, it was a good trip.