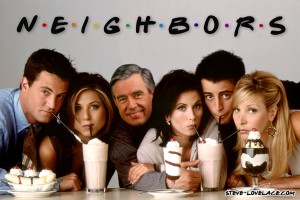 When you’re a little kid, it’s easy to make friends. For the most part, your best friend is the kid next door. Or the kid who sits next to you in kindergarten class. But as you get older, and you come to realize how big the world is, friendship by proximity no longer works. Instead you find a clique. This is most evident in high school, but it continues into adulthood. It’s why loners and losers in high school often make good friends in college. As you get older and more independent, your friendship pool grows, until you can find people with whom you have common interests, rather than simply forcing a friendship with your neighbors.

Thanks to modern communication, friendship by proximity is fast becoming a thing of the past. People don’t know their neighbors like they used to. But unlike many people out there, I don’t think that’s a bad thing. Knowing your neighbors is good for security purposes, but other than that, proximity doesn’t hold much influence over the friendships I make. Not when there’s the Internet.

In the early days, social outcasts used the Internet to reach out to like-minded people halfway across the world. But now that everyone has a laptop, tablet and smart phone, the Internet has really helped me build real-life friendships. I met most of my friends here in Dallas through Meetup.com, and I keep in touch with new friends and old via Facebook and email. I network with other bloggers and designers through Twitter and LinkedIn. That’s the real magic behind social media. It frees us to build relationships based on mutual interests, rather than physical proximity. And with so many people and so many interests, this seems like the best way to make and keep friends.