The End of Long Lost Friends 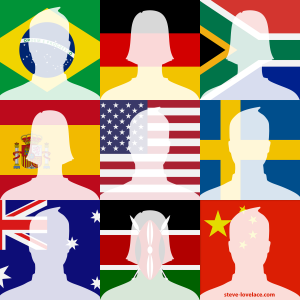 When I was twelve years old, my family moved to Michigan. I had to say goodbye to all my friends in Dupo, Illinois. A few months later, they wrote me a packet of letters in English class, but after that I lost touch. This was the early 1990s, and a long-distance phone-call was expensive. Aside from phone calls and letters, there was no other way to keep in touch with my long lost friends.

I kept the same friends through middle school and high school, though people came and went over time. But going from high school to college was a big change. Despite the senior yearbook pleas to “stay in touch”, I lost contact with most of my classmates. Even though I went to college just five miles away, Michigan State University was a different universe from Everett High School. I made a whole new set of friends and reinvented myself once again. Then everyone graduated and moved away and once again, I lost touch with most of the people I knew.

Alone in the Wilderness

I graduated college in 2004, a year or two after I should have. I didn’t want college to end. It was only when my good friends left that I decided it was time to graduate. So I got my act together and walked across the stage in my cap and gown. Then I went into the wilderness, figuratively speaking. For a year or two, I worked at a home decor store and lost track of my old college buddies. Little did I know that, right around this time, there was a growing influence of social networks, such as Friendster and MySpace. As a tech-savvy individual, I was aware of these services, but they we’re relevant to me until I moved to Samoa.

Reconnecting from Across the World

We didn’t even have Internet when we first went to Samoa, and I spent a lot of time going to a cybercafe in the village of Ill’ili. It was there that I started using MySpace and a very new service called Facebook. And there, on this remote island in the South Pacific, I reconnected with long lost friends from college, high school and even elementary school. It was weird at first. Most messages started along the lines of “I never thought I’d hear from you again.” It was an amazing feeling every time you found an old friend anew. I really miss the thrill of reconnecting with people I’d almost forgotten about.

I’m happy to stay in touch with my childhood friends, but we’ve reached a saturation point. Pretty much everyone who was going to join Facebook already has, and I’ve already befriended all of my closest childhood chums. In a world of constant connection, there’s no longer such a thing as long lost friends.