Deep in the Pit of the Stockroom 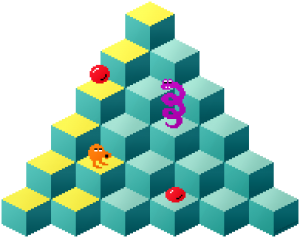 I worked at a home decor store back in college. It wasn’t my dream job, but it paid the bills. It was a small store with a dozen employees, so we did everything from unloading the truck to ringing up the customers. As one of only two guys on staff, I often got stuck back in the stockroom.

A Retreat from Customers

I didn’t mind the stockroom for the most part. We could open the back door on nice days and we could listen to the radio instead of the awful canned music they played out on the sales floor. And while I didn’t usually mind customers, it was rather nice to get away from them for a little while. Yes, working in the stockroom was A-OK with me, except when I had to venture into “The Pit”.

Most of the merchandise in the stockroom was stacked on shelves. There we put everything from scented candles to end tables. But our store also sold bigger things as well, like armoires and entertainment centers. And since this wasn’t an Ikea, the majority of this furniture was already assembled. This led to a lot of big boxes piled up the corner, into an area we called “The Pit”. The name didn’t make much sense, since pits by definition go downward, and this pile of boxes scaled up to the ceiling, but like a true pit, there was a feeling of impending doom.

Venturing Into “The Pit”

Working in “The Pit” always felt dangerous. Oftentimes you had to climb up to the top to get the box you needed, hoping to hell that the boxes beneath you didn’t give way. Once or twice, I was able to touch the 20-foot ceiling. But the real sucky part began when someone wanted a box off the bottom. First you would have to search for it by peeking through the crevices. Then you would have to disassemble half the mountain, moving box after heavy box. All this with customers waiting. After all, we had a (common sense) policy of not selling a customer a piece of furniture until we located it, so you could only hope they would be patient enough to wait for their armoire before paying. (We weren’t on commission, but we still didn’t want to scare off big customers. Thankfully, most people waited.)

I don’t know if “The Pit” violated OSHA regulations, but it sure as hell felt unsafe. Thankfully for me, the only thing I ever broke were my glasses. (It was hot and sweaty in the stockroom one day, so I put them in my pocket, where they snapped in half.) In any case, the thought of getting a bunch of government bureaucrats involved seemed worse than putting up with it. A decade later, I’m curious if this store (and others like it) still have their own Pits. Considering how small most retail stockrooms are, my guess would be yes.