Vertigo: A Roller Coaster Ride of an Ailment 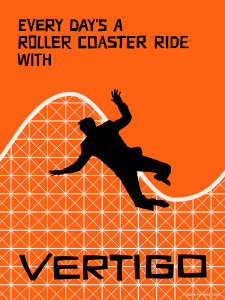 A poster that shows how I felt with severe vertigo. Based on Saul Bass’ iconic poster for Alfred Hitchcock’s “Vertigo”

A couple of weeks ago, I slept in on a Saturday morning, got up, and had some breakfast and coffee. Then it hit me. As I got up to do the dishes, I completely lost my sense of balance. I’d had vertigo before, usually in conjunction with an ear infection, but nothing like this. I hoped it was just dehydration, but I feared it was something worse. I drank a bunch of water and took a nap, but there was no improvement. By the late afternoon the nausea kicked in as well. This was an issue that wasn’t going to resolve itself.

I made an appointment at a nearby “doc-in-a-box”. My dad gave me a ride since I couldn’t drive. I promptly threw up in the waiting room and they told me to go to the ER. By this time it was Saturday night, and I didn’t want to spend the evening with the stabbing victims at Baylor Hospital downtown. So we went to one of the gazillion “ER-in-a-box” locations throughout the DFW Metroplex. They gave me drugs for the nausea, which helped, and drugs for the vertigo, which didn’t. Then they did an EKG, put in an IV that they never used, charged me $300 and sent me on my not-so-merry way.

For Better and For Worse

After tracking down a 24-hour pharmacy, my dad took me home. I took my medicine and slept. On Sunday, I was feeling a bit better. Well enough to go to work on Monday. I decided to postpone my Monday workout with my trainer, but otherwise I was doing well. But when the alarm went off on Monday morning, I was feeling worse than before. I called my dad and asked him if I was having a stroke. “No,” he replied, “but let’s be absolutely sure.” He picked me up and drove me downtown.

Now waiting rooms are my personal hell, but I felt so bad that it didn’t bother me that much. Ironically, for an ear issue, my hearing was totally fine. My vision wasn’t. So I sat with my eyes closed, listening to names being called and re-called. I couldn’t help but admire the assembly line operation. First they called me up for blood pressure and temperature. Then we sat. They called me back for an EKG and blood draw. Then more sitting. We had vending machine trail mix for breakfast/lunch. Then a CT scan and more sitting. Finally I got to see a doctor. Or rather, a physician’s assistant. The significance of this was lost on me at the moment, but I dad told me he was relieved. The fact that I got a PA instead of an MD meant my condition wasn’t super serious.

The PA came in and said my CT and blood work were clean. It wasn’t a stroke or a tumor or any weird exotic ailment. In fact, the problem was probably earwax. In all likelihood, I had impacted cerumen that, along with a lingering holiday cold, increased the pressure in my inner ear enough to dislodge a tiny little crystal in my vestibule. A nurse came in to irrigate my ears with high-pressure water and peroxide. I’ve had this done before, but this time it hurt. The wax was just that impacted. Unfortunately, it didn’t make an immediate difference, though the PA said it should keep it from recurring at least. Since the first vertigo drug hadn’t helped, he prescribed me Valium and discharged me. Once again, I had to pay a $300 copay, which conveniently for me, they could process at terminal in the examination room. (Yay, America! /s)

Valium didn’t help much with the vertigo either. Nor did the exercises the PA recommended. He showed me the Epley Maneuver. Basically, you tilt your head around to work the loose crystal(s) out of your vestibule. I’ve tried it a few times, and while it hasn’t helped, it hasn’t hurt either. What has helped is time. A week after my initial vertigo, I still feel weird. But at least I can walk and drive around okay. Talking to my trainer this morning, I learned that my proprioception is off. This is a big word that means knowing where your body is in physical space. It’s an important sense that you use while exercising, and working out post-vertigo, I feel a little lag. It’s like I’m in someone else’s body, and it’s going to take some time to getting my equilibrium back to 100%.

Have you ever had vertigo? If so, what caused it and how quickly did you get over it? Let me know in the comments.