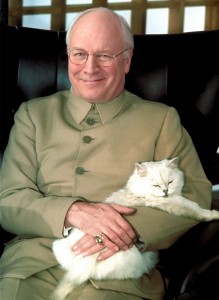 “How would you like to have brunch with me and Dick Cheney?” That’s a sentence I never thought I’d say to someone. But I did. It was back in college. I was the Internal Vice Chair of the Academic Assembly. As one of the officers of the student government, I got to do some interesting things. So when Michigan State booked Dick Cheney as its graduation speaker, they invited a select number of students to a private brunch with the sitting Vice President of the United States. Including me.

When I found out I was invited, I felt a brief moral dilemma. As a liberal, I was strongly opposed to the Bush administration’s policies. In fact, I had more than a few friends who were planning on protesting Dick Cheney’s visit. But then again, I have always been a proponent of open-mindedness and dialogue, so I saw no harm in listening to the man. (I still don’t.) So I decided to go. It was then I found out that I was allowed a plus-one.

I didn’t have a girlfriend at the time, so I had to think about who I wanted to take as a date. I had a classmate who was both cute and conservative, so I have her a call and asked her out to brunch with Dick Cheney. She thought I was kidding at first, but I convinced her that I was serious. Then came the really awkward part, asking her for her social security number. (The Secret Service required it.) Thankfully, she gave it to me, and I passed it on to the suits.

On the morning of the brunch, we went through metal detectors into the practice basketball court at the Breslin Center. There were a number of banquet tables, and my date and I sat with the other student government people. Then we waited. And waited. (For some reason, big, important public officials are always running late.) When he finally came out, it was with all of the flair and charisma you would expect from Dick Cheney. (That is to say, none at all.) The year was 2002, and we were halfway between 9/11 and Iraq. Cheney made the case for the War on Terror, as consistently as always. And even though this was a private reception with about 200 people, he didn’t go out of his way to shake hands or talk to individual people. I would have been surprised if he did.

Overall, it was an interesting way to spend the morning. I had a good time chatting with my friends there, and I got to say I had brunch with the Vice President. As for the girl I invited, we never dated, though we did become good friends (despite our different political leanings.) In that regard, I am very glad that I had the chance to invite her, though I hope I never again have to ask a girl for her social security number.

If there’s one thing I admire about Dick Cheney, it’s how comfortable he is with his place in history. Cheney’s been villainized by his opponents, and instead of refuting them, he’s embraced the villainous persona. As much as I disagree with the man’s views and methods, I admire his consistency. A decade after then invasion of Iraq, Dick Cheney is still the closest thing we have to a real-life Bond Villain.